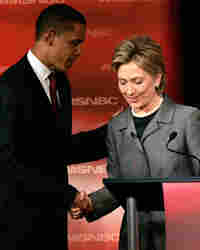 Democratic presidential hopefuls squared off in Orangeburg, S.C., in the first primary debate of the 2008 presidential race. On hand were Senators Hillary Clinton, Barack Obama, Chris Dodd, and Joe Biden.

NPR Political Editor Ken Rudin, who watched the debate in Orangeburg, tells Melissa Block that Obama and Clinton kept a cordial tone throughout, often referring to one another as "my friend."

The debate came nine months before the first scheduled primary next year.