Accessibility links
Rock With A West African Twist When pop stars collaborated with African musicians in the 1980s and '90s, they embraced sounds once heard as foreign and exotic. Now a new generation of American musicians is creating homegrown rock music with a West African twist.

I Won't Let It 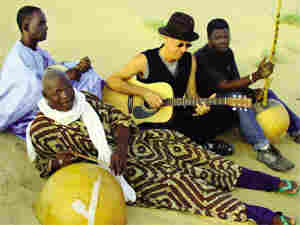 When pop stars Paul Simon, Peter Gabriel and Ry Cooder collaborated with African musicians in the 1980s and '90s, they were stepping out of the familiar to embrace sounds once heard as foreign and exotic. Today, a new generation of American musicians is creating homegrown rock music with a West African twist.

Singer-songwriter Markus James has long traveled to West Africa to compose and record his bluesy songs with local musicians there. After all, blues and rock's African pioneers mostly trace their ancestry to the region we now call Senegal, Gambia and Mali.

James' fifth album, Snakeskin Violin, treats American and West African roots music as one seamless continuum. When James fills out a blues vamp with a savanna hunter's harp or a desert calabash rhythm, it comes as naturally as quoting a John Lee Hooker riff. And, after nearly 15 years of refining his approach, James is now getting airplay in places like Lafayette, La., and Austin, Texas.

James is a pioneer in reconnecting blues with its deep, African DNA. But he's not alone anymore. While James was making his trips to Mali, Guelel Kumba — a musician from Senegal — settled in Oxford, Miss., where he co-founded a band called Afrissippi. Starting from the African side of the equation, Kumba finds common ground with Americans schooled in North Mississippi blues. Afrissippi's second album is titled Alliance.

Afrissippi and Markus James arrived at their Africanized rock formulations after years of experience in more established genres. Meanwhile, five twentysomething guys in Asheville, N.C., came out of the gate in 2005 as Toubab Krewe — "toubab" being a West African term for a white person.

Most of the players in Toubab Krewe have studied music in West Africa, internalizing rhythms, repertoire, melodic language and even instrumental techniques. Their amped-up take on the music rarely includes any vocals, but it's making big waves on the jam-band circuit. Toubab Krewe's live energy is captured on its version of the Malian classic "Kaira," from its latest record, Live At The Orange Peel.

The gyrating fans at Toubab Krewe's packed shows probably don't spend much time pondering the Atlantic slave trade, and how it infused African ideas into the incubator of American music. That's just the point. Markus James, Afrissippi and Toubab Krewe are not part of a world-music trend, but rather the ongoing emergence of Africa in American mainstream culture. They're cousins of out-and-out pop bands like Vampire Weekend, the East African rock outfit Extra Golden and other young groups that blend African and American idioms. Using music rather than words, these artists are showing us who we really are, and after all these years, it seems we're ready to listen.