Accessibility links
Lotteries Face Tough Odds In Flagging Economy Sales of lottery tickets are down as consumers cut back on nonessential spending. This is proving trying for many cities and states that rely heavily on lottery money for essential services, and lottery officials are launching new ad campaigns and strategies to spur ticket sales.

California Lottery TV Ad: "Isn't Any Jackpot Worth Playing For?"

The California Lottery has launched a television ad campaign, which includes this 15-second spot, in an attempt to boost slowing ticket sales. 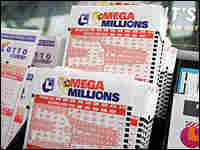 Tickets for the Mega Millions lottery went on sale in California in 2005, as the state joined 11 others in the game. As the economy worsens, lottery officials are seeing a decline in ticket sales. Justin Sullivan/Getty Images hide caption 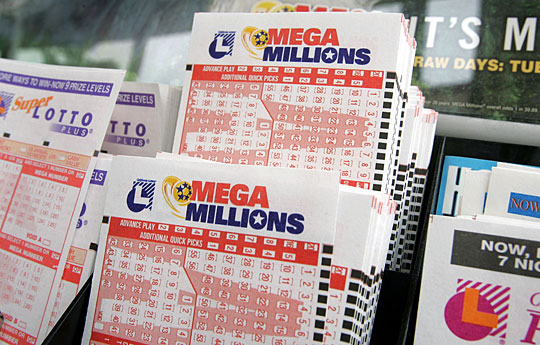 Tickets for the Mega Millions lottery went on sale in California in 2005, as the state joined 11 others in the game. As the economy worsens, lottery officials are seeing a decline in ticket sales.

In tough economic times you would think that people down on their luck might run out and buy lottery tickets.

But that's not what's happening. Instead, people are cutting back on nonessential expenses, and state lotteries are suffering. It's a problem because everything from schools to cities to state budgets relies on lottery money.

"There's a myth out there that in hard economic times, people will gamble more," says Buddy Roogow, director of the lottery in Maryland. "There's no evidence of that."

Roogow says lottery tickets are not a wise investment strategy — they're just entertainment. And in this economy, entertainment is taking a hit.

"My understanding is if you look at what's going on in [Las Vegas] and Atlantic City, they're all suffering right now, so lotteries are not going to simply be able to skate by in tough economic times," says Roogow. "We are not, as much as I would like to see it the other way, we're not a mandatory spend."

Lottery sales in Maryland are flat so far for 2008, and this year that's something to celebrate. Just about three-fourths of lottery states have seen their sales decline. California has had one of the steepest drops, where sales are down 10 percent in the first four months of this fiscal year compared with last year.

"We know that folks are facing more difficult times, and as a result perhaps they have less to spend on the lottery," explains California Lottery spokesman Al Lundeen.

Aside from the economic factors, lotteries have also had a bit of bad luck in recent months. Games like Powerball, Mega Millions and Super Lotto Plus in California rely on huge jackpots to generate excitement and sales. But Lundeen says when people win, the jackpots reset — and people have been winning — so the jackpots have been kind of unimpressive.

"People play those games more when the jackpots are large. In the first four months of this fiscal year the jackpots weren't unusually large — maybe only $7 million to $50 million," says Lundeen.

So the California Lottery is using TV ads to try to convince people they can still get rich from a smaller jackpot. One ad includes the tag line "Isn't any jackpot worth playing for?"

"Only in America is $100 million not enough to take a chance," bemoans Jeanette Michael, executive director of the Washington, D.C., Lottery.

She says Powerball, the multistate game D.C. is part of, has to have a jackpot around $200 million before people start rushing to buy tickets. Her lottery's sales are down almost 3 percent from last year.

The city of Washington, D.C., reaps the rewards when the lottery makes a profit. Lottery officials had told city budget planners to expect $70 million. Now Michael says it's looking more like $68 million.

"If the lottery doesn't make it, then they're going to have find the money from someplace else," she says. "Or certain services might not be provided."

In many states, schools get money from the lottery. In Massachusetts, home of one of the oldest and most successful lotteries, profits go to the cities and towns. Lottery Director Mark Cavanaugh says that as in past recessions, sales are down in his state. He is projecting that revenue could be off as much as $200 million, which works out to about a $40 million loss for the municipalities.

"We usually see some growth — it's unusual for us not to," says Cavanaugh. "But, hey, these are unusual times."

And in these unusual times no lottery director would encourage someone to spend his last dollar taking a chance.