Accessibility links
Threats On The Sea: A View From A French Warship For a week, NPR joined the French warship Premier Maitre L'Her, which has been protecting merchant ships on the vast seas of the Gulf of Aden. The ship has been searching for suspicious vessels, part of an effort to stem a piracy epidemic.

Listen
Threats On The Sea: A View From A French Warship

In October 2000, the USS Cole was bombed by suspected terrorists in the port of Aden, killing 17 sailors. That attack haunts navy sailors who patrol the Gulf of Aden for threats, including pirates, says Lt. Cmdr. Alexis Beatrix, the captain of the French vessel Premier Maitre L'Her. M.C. Miller/AFP/Getty Images hide caption 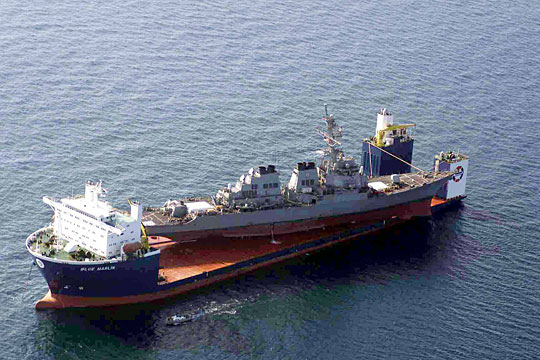 In October 2000, the USS Cole was bombed by suspected terrorists in the port of Aden, killing 17 sailors. That attack haunts navy sailors who patrol the Gulf of Aden for threats, including pirates, says Lt. Cmdr. Alexis Beatrix, the captain of the French vessel Premier Maitre L'Her.

Ships from some of the world's strongest navies are patrolling the Gulf of Aden, trying to stem an epidemic of piracy that has shaken one of the world's major trade routes. Based on the lawless coast of Somalia, the pirates have collected millions of dollars in ransoms for ships and their crews captured on the open seas.

For a week, NPR joined the French warship Premier Maitre L'Her, which has been protecting merchant ships and searching for the pirates.

It may seem incredible that pirates can operate anywhere on the Gulf of Aden, given the overwhelming technical superiority of modern navies with their radars and aerial surveillance. But the area is so great that it's possible to sail for days without seeing another ship on the horizon.

In fact, more than 20,000 ships pass through the vast body of water each year on their way to the Red Sea, the Suez Canal and the Mediterranean.

The Premier Maitre L'Her is part of a European Union effort to stamp out piracy and protect shipping, but its captain, Lt. Cmdr. Alexis Beatrix, knows how hard that can be.

"It's very difficult for you to assess whether this craft [is] a fishing craft, or whether they are pirates, given that it's very easy to shift from fishing to piracy," Beatrix says.

Beatrix swings his vessel out of the harbor in Djibouti, a former French colony at the choke point where the Gulf of Aden flows into the Red Sea. His mission is to escort a freighter chartered by the World Food Program as it delivers food aid to the port of Bossaso on Somalia's north coast.

The Premier Maitre L'Her is a light warship, smaller than an American destroyer, but it's armed with everything from machine guns to Exocet missiles.

On the second day out, the captain puts his gunners through their paces, firing at balloons dropped in the water.

It's not that Beatrix really expects the lightly armed pirates in their speedboats to confront a warship. But he says that one thing that haunts navy commanders is the specter of the USS Cole, which was bombed in the harbor at Aden in October 2000 in a terrorist attack that killed 17 American sailors.

"What happened to the USS Cole could happen anywhere around the world," Beatrix says. "It was not a very difficult attack, but very, very efficient, of course, as we know."

While outgunned and outmanned, the pirates have pulled off some audacious attacks. The most spectacular this year have been the seizure of a supertanker carrying an estimated $100 million in Saudi oil and the hijacking of a Ukrainian cargo ship transporting nearly three dozen armored tanks. Both ships and their crews have been held captive for more than a month while negotiations continue. In all, the pirates have hijacked more than 40 ships this year, extracting millions of dollars in ransom.

On the morning of the second day at sea, the frigate encounters an Arab-style dhow, a wooden vessel with a high, sloping stern that's used by fishermen and traders who sail between Somalia and Yemen.

"What is particularly interesting is that she's towing a skiff that could make her a mother ship with a skiff that is equipped for pirate attack — maybe," Beatrix says.

When the sailors can't raise the boat on the radio, the ship's executive officer uses a high-powered bullhorn to ask the boat's captain to identify himself and his vessel's country of origin.

The boat proves to be a small trader, carrying fuel for fishing boats. The sailors find no weapons, or any sophisticated communications gear that might be used to contact pirate bases on shore.

Beatrix calls his sailors back to the ship to be ready to repeat this process over and over during the coming days, combing the sea for small, anonymous vessels, any one of which could carry pirates.