Accessibility links
Grim Puppy-Mill Shipment Makes L.A. Take Notice Purebred dogs go for top dollar in pet stores around the country, but buyers of cute, cuddly puppies may not know that some come from unregulated breeding mills overseas. In Los Angeles, one recent shipment of dead and ailing puppies from South Korea got the city's attention. 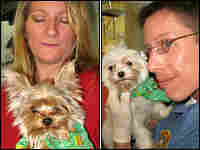 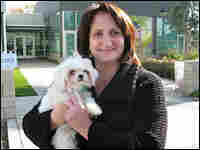 Debbie Garringer of Claremont, Calif., holds one of the two dogs she won at the auction. Garringer paid $2,000 for this miniature Maltese. Carrie Kahn/NPR hide caption 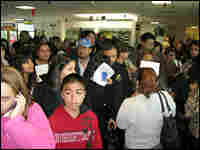 Hundreds of people turned out to bid on 10 purebred puppies at L.A.'s East Valley Animal Shelter. The auction raised more than $20,000 — money that will go to the city's animal shelters. Carrie Kahn/NPR hide caption

Purebred dogs go for top dollar in pet stores around the country, but buyers of cute, cuddly puppies may not know that some come from unregulated breeding mills overseas. So-called puppy-mill dogs are showing up sick and dehydrated at major airports around the country.

In Los Angeles, one recent shipment of dead and ailing puppies from South Korea got the city's attention. Twenty of the dogs in the shipment seized at Los Angeles International Airport either had died or had to be euthanized after the trip. The 10 survivors were turned over to the city's shelter.

Five months later, those survivors — five miniature Maltese and five tiny Yorkshire terriers — were ready for adoption. Hundreds of animal lovers, many wrapped in blankets to keep warm, lined up on a chilly morning in front of L.A.'s East Valley Animal Shelter for a chance to bid on the dogs.

Ed Boks, the general manager of L.A. Animal Services, was thrilled at the turnout. City law requires him to hold an auction when more than one person wants an animal.

"I want to begin with a few facts that you won't commonly hear from your local pet store with respect to where animals, puppies just like this, can often times go for $3,500 or more," he told the crowd.

Boks said the 10 minipurebreds arrived with forged health certificates. The documents put their ages at 5 months, but they were actually only 5 weeks old.

"These puppies are the product of a cruel, factory-style dog breeding operation that produces animals with chronic health problems, temperament issues and hereditary defects, so our message to all of you this morning is buyer beware," he warned.

Puppy mills began proliferating overseas about five years ago, at about the same time that U.S. authorities started cracking down on unscrupulous domestic breeders.

Tom Sharp of the American Kennel Club says that's when he started seeing bulldogs arriving from Russia and Yorkies from South Korea. With the help of the Internet, Sharp says, dishonest pet stores and breeders could easily get puppies overseas.

"That way, they don't have to be inspected by the different organizations and the governments here in the U.S., and avoid all the requirements," he says.

Right now, the only federal requirement an importer has to follow is to provide proof of a current rabies vaccine — documentation that is easily forged.

Federal regulators say that rule was written at a time when the only dogs coming into the United States were companion pets. Nina Marano of the Centers for Disease Control and Prevention says Congress just passed a law banning the importation of dogs under 6 months old for resale.

But Marano says it will take at least two years for the ban to be enforced.

"We can try to regulate our way out of it, but another part is, I think, the issue about demand — that there needs to be a lot more public education about the demand that is being created for these puppies," she says.

The demand was high for Los Angeles' puppy-mill survivors.

One winning bidder was Debbie Garringer. "I was really lucky, and I'm happy, so happy, and I will take care of it so much and it will have a beautiful home," she said.

All 10 of the purebred puppy-mill survivors got new homes, as did 52 other pets from the shelter. In all, Animal Services raised more than $20,000 and got its message out: Adopt, don't shop.