Accessibility links
Steve And Justin Townes Earle: Life Lessons Justin Townes Earle went into the same business as his father, country-rock singer-songwriter Steve Earle, who taught his son a lot about rebellion and making music. Together, they talk about the parallels between their lives growing up.

Who Am I To Say

See more stories in this series: 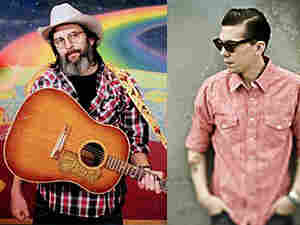 Steve Earle (left) and his son, Justin Townes Earle, are both acclaimed singer-songwriters. Courtesy of the artists hide caption

Justin Townes Earle went into the same business as his father. Steve Earle, the acclaimed singer and songwriter, passed on a lifetime's worth of advice about music and rebellion.

Justin says his father wasn't easy to rebel against.

"I could have become a Republican," he says. "That would've really pissed him off."

Instead, says his dad, Justin took up golf. Steve says Justin would hit golf balls in the front yard, just to irritate him.

But Justin says that no one in his family — on either his mother's or his father's side — discouraged him from playing music. He was in trouble a lot when he was young, but Steve Earle says he recognized his son's behavior.

"I knew what this looked like," he says. "I couldn't do anything else."

Steve says he raised his kid on food stamps because he wasn't prepared to do anything else with his life but make music. So he wasn't shocked when Justin began following the same path he did.

When Justin did begin writing songs, his dad gave him some advice. At around age 13, Justin says he hadn't been reading much, but his dad told him, "If nothing was put in, then nothing comes out."

Asked if he'll pass on music to his children, Justin says he has the feeling his offspring will not be as similar to him as he is to his father: "I got a feeling that when I have kids, I'm going to have a little girl, and she's going to be completely sensible," he says.

"I do believe in karma," he says, "and if you think for one minute that there would be anything karmically correct for you to have a well-behaved little girl, you're dreaming."