Accessibility links
Getting To The Root Of The Great Cilantro Divide Some people find the herb cilantro so odious that they believe it should be wiped off the planet. But is it the taste or the smell? One cilantro hater goes in search of the truth.

Listen
Getting To The Root Of The Great Cilantro Divide 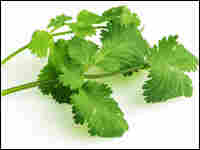 Some cilantro haters say that the herb tastes like soap. iStockphoto.com hide caption

Are You A Supertaster?

The "Prop test," outlined in this story, is one of the most widely used assessment methods. The subject chews a piece of paper soaked in propylthiouracil, a special taster chemical, for about a minute. Those who are put off by a horrible taste are supertasters. You can purchase the test on the Web via sites such as this one.

The genotype test is another method. This involves dying one's fungiform papillae blue. Supertaster tongues have far more taste buds than normal tongues, the logic goes. You can see a comparison photo here.

But as Dr. Danielle Reed explains in this paper (PDF), it's far from a straightforward process. Just because you fail one test doesn't mean you won't pass another.

I hate cilantro. As far as I'm concerned, it should be wiped off the face of the planet. And I'm not alone in my extremist views.

"It has that same sort of acrid sweetness of death," according to my friend Jason. "It's got this evilness to it," my friend Wendy concurs.

For people like us, the smell alone is enough to send us running in horror. But why? What fuels the great cilantro divide?

My quest for answers began with the Internet. It was there that I learned (from questionable sources) that our hatred arises from the fact that we are supertasters. Gifted (or burdened) with a "supersensitive palate," we are some of the rare beings who are tuned into the true nature of this nasty green beast.

" 'Supertasters' is actually a term that was originally envisioned to describe people who were particularly sensitive to a very restricted class of bitter compounds," explains Dr. Danielle Reed of the Monell Chemical Senses Center in Philadelphia, before delivering the big blow: "None of which, to the best of my knowledge, are found in cilantro."

Even though Reed has done a ton of research on supertasters, I'm still willing to believe that I'm one of them. I decide to take the official test, which involves chewing up a small strip of paper soaked in propylthiouracil, a special taster chemical, for about a minute.

True supertasters don't need that long to identify the nauseating taste, however.

"If you were a supertaster, you would be very angry with me right now," Reed explains as I dutifully chew the paper. "You would be experiencing that as intensely bitter."

I taste nothing, which leads Reed to conclude that I am a "non-taster." Not even normal taster — a non-taster.

"A lot of journalists tend to be non-tasters. Wine reporters are especially upset when they find out," she explains.

As it turns out, my girlfriend, Danielle, and my friend Wendy are both supertasters. They can't wait to spit out the paper.

After all this, I'm willing to admit that being a supertaster has nothing to do with hating cilantro. So what could it be? The answer comes to me as I chew cilantro while holding my nose. Without smelling it, I find, it's more like harmless old parsley, but when I release my nose, it's like a bottle of soap.

According to Dr. Charles Wysocki, another Monell scientist, the problem extends far beyond me and my group of friends.

Wysocki took some chopped up cilantro to Twinsburg, Ohio, for the annual twins festival, and had identical and fraternal twins sniff cilantro and rate pleasantness. People tended to fall mainly into two groups — the lovers and the haters — and identical twins almost always rated cilantro the same way as their sibling counterpart.

This seems to suggest, "that there's a strong genetic component," he explains. "People like you may be smelling things that other people aren't."

I gather from this that the problem is that I'm a supersmeller of some sort. While cilantro lovers like Wysocki think cilantro smells "fabtastically savory," we haters are smelling something more. I needed a Gas Chromatograph (GC) to confirm my hypothesis.

The GC is a machine that basically separates a sample of stuff into its constituent compounds. It slowly heats up a sample of material over the course of 40 minutes. As the temperature rises, each compound in the mix evaporates at different times. A flow of air passes over the sample and is split into two streams: One goes past a detector; the other one goes past the subject's nose. So if we put cilantro in the GC and I smell something at minute 8 and something else at minute 12, we can pinpoint what the offending odor is.

I put my supersmelling nose to the test and at 20 minutes, I identify the evil smell.

"They're all unsaturated aldahydes," Dr. George Preti explains. There we have it, the compound that ruins every dish and makes me think of soap.

Ten minutes later, Wysocki and Preti identify the unmistakable smell of cilantro that they love. I, however, smell nothing.

This, it turns out, is the real problem. My whole life I've been unable to pick up on the scent that is so overwhelmingly good for cilantro lovers that it trumps any possible bad. I come to a disappointing realization: I am not an X-Man with superkeen sensory abilities. I am a sensory dud who's missing the true nature of cilantro.

"I Hate Cilantro," A Web Site For Haters
Recipes For Cilantro Lovers