Accessibility links
Mass. Homeowners Rally Against Foreclosures In Massachusetts, foreclosure filings have nearly doubled over the past year. People facing foreclosure rallied at the Massachusetts State House on Thursday.

In Massachusetts, foreclosure filings have nearly doubled over the past year due to mortgage payments overwhelming some homeowners.

Many who face foreclosure rallied at the Massachusetts State House on Thursday. They're asking Gov. Deval Patrick for a moratorium on foreclosures. Patrick is a former director of Ameriquest, one of the nation's largest subprime lenders.

The Mortgage Market: What Happened? 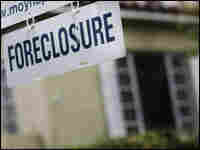 Nationwide, foreclosures surged by 47 percent in March compared with a year ago, according to RealTrac, which follows mortgage foreclosures. Joe Raedle/Getty Images hide caption

Instances of outright mortgage fraud are also coming to light. Reports of suspected fraud from federally regulated institutions more than doubled between 2003 and 2006. Federal officials estimate mortgage fraud totaled from $1 billion to $6 billion in 2005 alone.

One strategy involved organized groups that sold several homes in a neighborhood based on inflated appraisals. An individual would buy a property, then sell it to a real or straw buyer at an inflated price and pocket the difference. Often, a ring of appraisers, mortgage brokers, real estate agents and closing attorneys colluded with the seller to push through the deal.

Such schemes temporarily drove up prices in neighborhoods, hurting other, earnest buyers who paid for homes that quickly lost their value.

Quicker processing times to accommodate the growth in mortgage volume made the system "abuser friendly," says Robert Russell, counsel to the Office of Thrift Supervision, which regulates some lending institutions. Rewarding brokers for sale volume, rather than for loan repayment, also contributed.

As the nationwide real-estate boom of recent years goes bust, economists and regulators are questioning the role that mortgage lenders played in helping to create an overheated housing environment. Here, an overview of what happened:

A Rush of New Buyers

In the early 2000s, the economy was healthy, interest rates were low and consumers felt a bit flush – all of which helped push real-estate values up across the country. With values escalating, lenders felt more confident about making mortgages to customers whose poor credit histories had prevented them from buying homes in the past. (When values are rising, borrowers are less likely to default, because they can take money out of their homes if they run into trouble.)

That put more potential homebuyers in the market, helping to raise home-ownership rates to a record 69 percent in 2004 – which pushed housing prices up more. Skyrocketing prices (double-digit growth year over year was common in some areas) lured real-estate speculators, creating even more demand — and driving the cycle further.

To attract this growing pool of borrowers, lenders repurposed "creative financing" products that had previously been marketed to high-income borrowers seeking flexibility with their money. Among the most popular were variations on the adjustable-rate mortgage, or ARM.

ARMs are loans whose interest rates adjust up or down periodically. The initial rate is typically fixed for a period of two or three years. The benefit is that the starter rates are lower for ARMs than for traditional, fixed-rate mortgages. That means lower monthly payments, making homeownership more affordable and allowing borrowers to qualify for a bigger loan.

How prevalent were these loans? Nearly 23 percent of all mortgages taken out in 2005 were interest-only ARMs, and more than 8 percent were payment-option ARMs, according to First American LoanPerformance. In certain once-sizzling markets, the numbers were much higher: For example, 34 percent of all new mortgages in California in 2005 were interest-only.

These products made sense to borrowers who thought they'd live in their homes for a few years, then sell at a profit or refinance. But now that housing sales have stalled and prices are softening, borrowers can't do either very easily.

And many borrowers are facing painful payment hikes: According to a First American CoreLogic study, one-third of ARMs taken out between 2004 and 2006 began with "teaser" rates below 4 percent. Payments on these loans will double on average – if they haven't already done so, says study author Dr. Christopher Cagan.

And then there were the loans to borrowers with poor credit. Subprime loans expanded to 20 percent of the mortgage market in 2006, from 9 percent a decade earlier. These loans carry higher interest rates to compensate for the risk posed by borrowers. They can be traditional fixed-rate loans, but most are ARMs, according to Susan Wachter of the University of Pennsylvania's Wharton School.

Recent subprime loans were rife with risky terms — interest-only payment options, penalties for paying off the loan early (which makes it costly to refinance into a better loan), and low documentation requirements, meaning borrowers needed little paperwork to verify that they could, in fact, afford the loans. (These so-called "liar loans" accounted for about 58 percent of all loans in 2006, according to First American LoanPerformance).

Kathleen Keest of the Center for Responsible Lending says the pairing of these new loan types and new pool of borrowers was dangerous.

"They took the riskiest of products and sold them to the weakest borrowers to compound risk," Keest says.

In the old days, most homeowners obtained mortgages from their local bank or credit union, which adhered to strict lending rules. Nowadays, the lion's share of homebuyers' business (70 percent) goes to independent mortgage brokers — some of whom get bonuses for steering borrowers to higher-interest loans.

Experts say many recent borrowers were put into ARMs that are likely to cost far more over the life of the loan than if they'd chosen a fixed-rate option. Often, consumers could have locked in fixed-rate loans at low interest rates, but lenders downplayed the advantages of these loans.

Experts also cite numerous cases where borrowers say they didn't understand the loan structure — and the escalating payments; in many cases, they couldn't really afford them. Jennie Haliburton, a 77-year-old widow in Philadelphia, told NPR she refinanced into a subprime ARM that now costs her $300 more than the $800 she was originally told she'd pay. Her loan resets in May 2008. If the current interest rate holds, the monthly payments will grow to $1,218; depending on rates, they could eventually reach almost $1,700 — 95 percent of her Social Security income.

New loan products allowed more Americans to own their own homes than ever before. But regulators exercised little oversight over the booming mortgage market. The Federal Reserve and four other federal regulators did not issue guidance for nontraditional mortgages until last year. They recommended that lending institutions consider the borrowers' ability to make payments over the life of the loan before underwriting, and that they improve disclosure to consumers.

Yet many, including Federal Reserve executive Roger T. Cole, say it was too little, too late. "Given what we know now, yes, we could have done more, sooner," Cole told Congress in March.

But the loans are already out there; all that's left is to wait for the fallout. According to First American CoreLogic, this year and next, about $260 billion in prime ARMs and $376 billion in subprime ARMs will begin to reset.

The new environment may also drive new solutions. Lenders now face falling home prices, large loan portfolios with no money down, and a home-foreclosure process that may cost them tens of thousands of dollars. Renegotiating loans -– lowering the interest rate or extending the payment period –- may be more attractive than foreclosing.