Accessibility links
Singer And Actress Eartha Kitt Dies Singer and actress Eartha Kitt has died of colon cancer. She was 81. Kitt, who was ostracized as a child in South Carolina because of her mixed-race heritage, got her start in show business as a dancer and vocalist, and earned early international notice as a featured singer in a Paris nightclub.

Singer and actress Eartha Kitt has died of colon cancer. She was 81. Kitt, who was ostracized as a child in South Carolina because of her mixed-race heritage, got her start in show business as a dancer and vocalist, and earned early international notice as a featured singer in a Paris nightclub.

SIEGEL: Singer and actress Eartha Kitt died today at 81. Her career included playing the Catwoman on the TV show "Batman." She danced for Katherine Dunham, she acted with Orson Welles and Sidney Poitier, but above all, she sang.

SIEGEL: In 1968, Kitt's outspokenness dealt her career a setback. She attended a White House luncheon hosted by First Lady Lady Bird Johnson. Kitt voiced her opposition to the war in Vietnam and it was reported that she reduced Mrs. Johnson to tears. After that, she worked mostly abroad for several years. Eartha Kitt's life story was an American epic. Born on a South Carolina plantation to a black mother and a father she never knew, conceived in a rape. About a year ago, Eartha Kitt spoke with NPR's Renee Montagne about her career and her childhood living with her mother.

Ms. EARTHA KITT (Singer, Actress): I don't even know if she was my mother or not, but at any rate because she was having problems getting some place for us to stay - she had another little girl, I remember, that little girl was always in her arms. She was able to walk it when my first scene in life was us walking down a road trying to find some place to stay, because every time she knocked on a door to ask if she could stay there. I would always hear a great big voice that said no, I don't want that yellow girl in my house when they saw what color I am. So I was always hiding behind her, until we were finally accepted in a little cottage in the middle of a cotton field somewhere.

MONTAGNE: And - I mean there will be people who won't understand why being fair-skinned, what's wrong with that? What did that say about you, a little girl, who in every respect, was innocent?

Ms. KITT: Well, I think at that time, and there's still a kind of connotation behind that, if you are a yellow gal and you're illegitimate, particularly, you have two strikes against you, you don't know who your parents are, so you become the maid in that house. And that was my position.

Ms. KITT: Yeah, you could talk about - I always thought of myself as a sepia(ph) Cinderella, and look I'm still looking for my prince, but the prince turned out to be me, because I had to work for everything I got.

MONTAGNE: My prince will come.

Ms. KITT: Which I've also been, it's terribly funny, because every time I sing "Santa Baby," I laugh more at myself when I'm singing that song because I know what I've gone through and the song says Santa baby, slip a sable under the tree. Well, all the men who have done that with me had never stayed with me, so I realized everything that I want in life I have to pay for myself, and I really love that because then nobody owns me, but me, and my public of course.

SIEGEL: In recent years Eartha Kitt appeared on stage in New York and she recorded "Smoke Gets In Your Eyes" for a cosmetic commercial campaign just last year. Today, Eartha Kitt died at Columbia Presbyterian Hospital in New York City. Luckily, her singing and her signature growl are preserved on hundreds of recordings including this seasonal favorite.

SIEGEL: You're listening to NPR News. 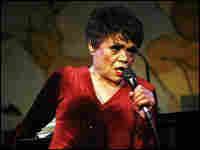 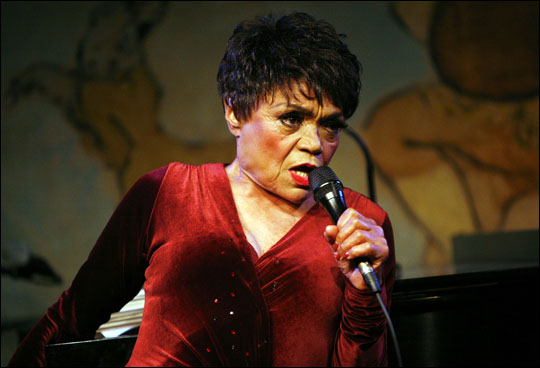 Entertainment legend Eartha Kitt made it in Hollywood after a challenging childhood that included picking cotton in her native South Carolina.

Eartha Mae Kitt was ostracized at an early age because of her mixed-race heritage. At 8 years old, she was given away by her mother and sent from the South Carolina cotton fields to live with an aunt in Harlem. In New York the shy teen auditioned for the famed Katherine Dunham Dance Troupe. She won a spot as a featured dancer and vocalist and before the age of 20, toured worldwide with the company. During a performance in Paris, Kitt was spotted by a nightclub owner and booked as a featured singer at his club. Her unique persona earned her fans and fame quickly, including Orson Welles, who called her "the most exciting woman in the world."

At 80 she still enjoys performing and also goes to the gym regularly, but beyond that she's a homebody.

"I never have been fond of going out because I don't want to dress up unless you put me in Eartha Kitt paraphernalia and put me on stage — OK, I'm on duty now."