Accessibility links
Former CIA Chief Says Iraq Threat Not Debated Former CIA Director George Tenet is defending his actions in the months leading up to the Iraq war in a new book called At the Center of the Storm. Reporter Mark Mazzetti of The New York Times speaks with Steve Inskeep about Tenet's view of his own role in the road to war.

Former CIA Director George Tenet is defending his actions in the months leading up to the Iraq war in a new book called At the Center of the Storm. Reporter Mark Mazzetti of The New York Times speaks with Steve Inskeep about Tenet's view of his own role in the road to war.

Here's a quote from a former insider describing the run up to the war in Iraq. "There was never a serious debate that I know of within the administration about the imminence of the Iraqi threat." Those are the words of former CIA Director George Tenet who is defending his actions in the months leading up to the war.

Tenet makes that statement on a new book called "At the Center of the Storm." The New York Times obtained a copy before next week's official release. There's a report in the book in today's paper. Mark Mazetti is one of the reporters who wrote it. He's on the line. Mr. Mazetti, welcome to the program.

Mr. MARK MAZZETTI (Reporter, New York Times): Thanks for having me.

INSKEEP: What did George Tenet say was missing from that debate before the war?

Mr. MAZZETTI: Well he says that there was never a debate about whether the threat was imminent from Iraq, whether they could have contained Saddam Hussein without an invasion. He does not say that he all along knew there wasn't weapons of mass destruction. In fact, he says in the book that he thought there were weapons of mass destruction, but he says there wasn't a debate about other options besides an invasion.

Mr. MAZZETTI: That's right. He describes a Bush administration that after September 11th was, in many ways, hell bent on going to war with Iraq. And some of the people he cites as being particularly eager for it are Vice President Cheney, Paul Wolfowitz and other Pentagon officials.

INSKEEP: Well this is a period when George Tenet was the head of the CIA. He's frequently right at the president's elbow or right across from the desk the president perhaps. How did he described his role on that time?

Mr. MAZZETTI: Well Tenet describes his role as that of not policymaker but intelligence chief, the person who provides the information so that policymakers can make decisions about whether or not to, for instance, go to war. Now some would debate that it would be absurd for someone to say that they could be sitting in all these meetings and providing intelligence and not have an active role in the debate. But Tenet talks about how he provided the intelligence about WMD and how he was very skeptical about the purported link between Iraq and al-Qaida, which was cited as one of the reasons to go to war.

INSKEEP: Wait a minute. He's skeptical about those links, which the CIA was - based on all evidence, but it was also Tenet who said the words that maybe he's at risk of having on his tombstone. He was asked if there are weapons of mass destruction in Iraq and he said that's a slam dunk.

Mr. MAZZETTI: And Tenet spends an entire chapter of his book on this. In fact, the chapter is titled Slam Dunk. And he says in the book if he hadn't actually said those words he might never have written the book. And his explanation of the slam-dunk episode is that it happened during a meeting in December 2002, and they were discussing how to make a public case for the war and a draft presentation had been given in the Oval office. And the president was underwhelmed. And Tenet chimed in that it was a, quote, "slam dunk" to improve the public case for war. That's his explanation for the comment.

Mr. MAZZETTI: He's saying, in a way, yes. He's saying that you could - it was a slam dunk to make a better case. The slam-dunk reference he said was not talking specifically about the intelligence for the Iraq war.

INSKEEP: Mr. Mazzetti, thanks very much.

Mr. MAZZETTI: All right, thanks.

INSKEEP: Mark Mazzetti is a reporter for The New York Times. He's been reading George Tenet's new book "At the Center of the Storm," which will be formally published next week.

And we do have an early response from the White House about George Tenet's book. A senior White House counselor, Dan Bartlett, has been talking to the NBC Today Show, and he says, quote, "the president did wrestle with those various serious questions." Bartlett goes on to say that George Tenet is a true patriotic that suggested he might have been unaware of how broadly the situation was debated before the war in Iraq. 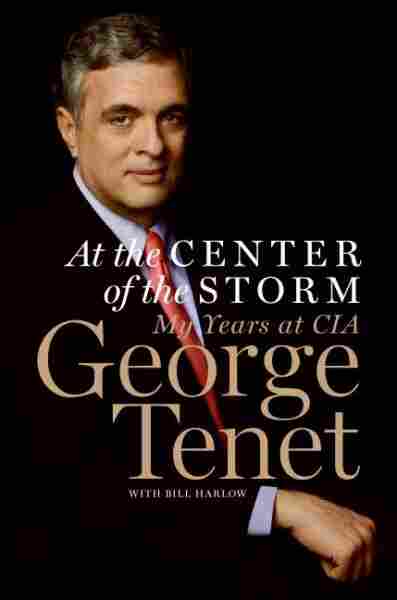 At the Center of the Storm

My Years at the CIA

by George Tenet and Bill Harlow