Accessibility links
'Head Hunters' Found A New Direction In Jazz Herbie Hancock's album is now considered one of the defining moments in jazz fusion. The Library of Congress is preserving the album in its musical collection as one of the country's most culturally significant audio recordings. Hancock and producer David Rubinson reflect on the album's creation and long-lasting impact. 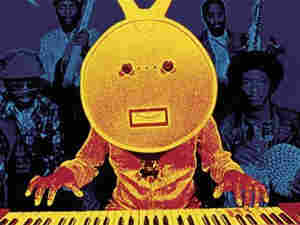 An image from the cover of Herbie Hancock's Head Hunters. hide caption

Herbie Hancock's 1973 classic Head Hunters, the first platinum-selling jazz record, is now considered one of the defining moments in jazz fusion. The groundbreaking album — a true fusion of influences, capturing elements of jazz, R&B, funk and African music — became a hit among jazz and non-jazz listeners alike, thanks to its danceable grooves, complex compositions and lengthy improvisations.

The Library of Congress recently opted to preserve the album in its musical collection as one of the country's most culturally significant audio recordings.

Hancock, along with producer David Rubinson and Steve Pond (author of Head Hunters: The Making of Jazz's First Platinum Album) recently reflected on Head Hunters' creation, as well as its long-lasting impact.

"At a certain point, I became a kind of musician that has tunnel vision about jazz," Hancock says. "I only listened to jazz and classical music. But then, when I noticed that Miles Davis was listening to everything — I mean, he had albums of Jimi Hendrix, he had Beatles records, he had Rolling Stones, James Brown — I started to re-examine this kind of closed attitude that I had."

Hancock says he found great inspiration and freedom in the music of James Brown and Sly Stone, and sought to incorporate some of funk's distinct sounds and rhythms into his group. Hancock also further experimented with electronic keyboards such as the Fender Rhodes, clavinet and the ARP Odyssey synthesizer, which provided the famous bass line of the song "Chameleon."

"I didn't realize at the time," Hancock says, "but looking back, I see that it was carving out a new direction."