Accessibility links
Wind Farms Could Bring Wyoming Ranchers Windfall Landowners in the Cowboy State are banding together to form "wind associations." These ad-hoc groups are providing leverage for farmers who are looking to use their land to profit from new wind farms. Wind energy could provide the ranchers with a more stable source of income. 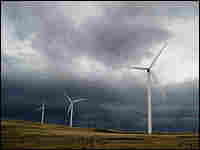 Wind farms, like this one west of Cheyenne, are becoming more common in Wyoming. Farmers and ranchers are finding leverage in "wind associations," where land is pooled for development. Addie Goss for NPR hide caption 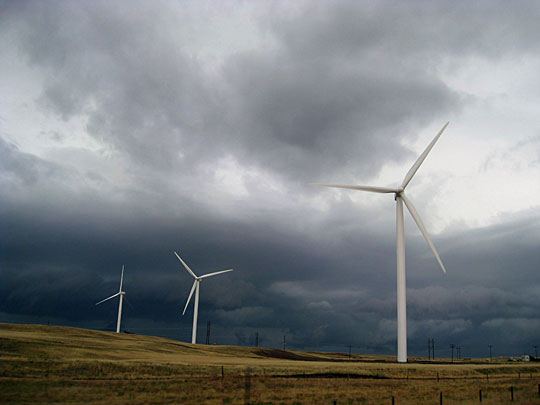 Wind farms, like this one west of Cheyenne, are becoming more common in Wyoming. Farmers and ranchers are finding leverage in "wind associations," where land is pooled for development. 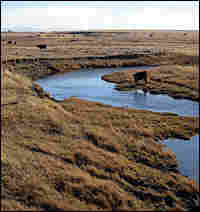 Landowners in the rural Laramie Valley of Wyoming are increasingly turning to wind power for a more stable source of income, as profits from cattle can be volatile. Addie Goss for NPR hide caption 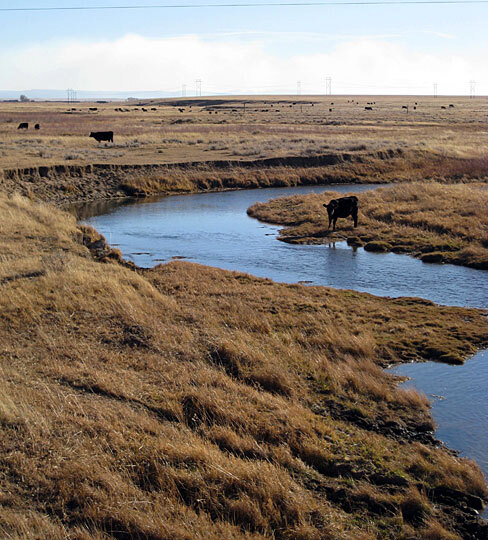 Landowners in the rural Laramie Valley of Wyoming are increasingly turning to wind power for a more stable source of income, as profits from cattle can be volatile.

It's been a rough year for the ranching industry as fuel and hay prices skyrocketed and Americans ate less beef. Many ranchers are beginning to look for extra sources of income, and they're finding it in their backyards — wind.

In Wyoming, some landowners are forming "wind associations" by pooling their land together to market it to companies eager to harness and profit from the wind power of the plains.

Kathy Speiser, who owns a farm in Laramie Valley with her husband Pep, says wind speeds in this valley can reach 80 miles per hour. Pep says that can be deadly in the winter.

"When the temperature is 20 degrees, maybe, and you get a 30 mph wind, it doesn't take long to chill a calf," Pep Speiser says.

But about two years ago, that cruel Wyoming wind started to become a commodity. Strangers began to drive up the long dirt roads in the valley, knocking on ranchers' doors. They were wind developers who wanted the rights to build wind turbines in the area or to sell those rights to bigger companies.

Putting A Price On Wind

Rancher Jim Rogers says some of his neighbors felt pressured to sign leases, but they didn't know what their wind was worth.

"You had to be kind of careful at first — lot of wind companies trying to tie up land," Rogers says.

Grant Stumbough, the visionary behind Wyoming's new model of wind development, says many of the landowners "didn't know how to deal with that." Stumbough, who works for a state branch of the U.S. Department of Agriculture, has a deep affinity for people who work the land. Two years ago, when Stumbough heard reports of wind developers roaming the state, he had an idea:

"Why can't we work together and get a better price?" he says.

To build a wind farm, developers lease large blocks of land. They usually approach many landowners and make separate deals.

But Stumbough saw an opportunity to give landowners more leverage. Ranchers and farmers pool their land together — up to 100,000 acres in some cases. They work with developers as a group and share the profits. That idea can be a tough sell for many in Wyoming, who value their independence and privacy, but Stumbough says the handful who join wind associations have an advantage with developers.

"When you put these larger blocks of land together, that's exactly what [developers are] looking for — so it becomes a whole lot more marketable," Stumbough says.

'A One-Stop Shop' For Developers

Susan Williams Sloan, who works with the American Wind Energy Association, a trade group for the wind industry, says wind associations have streamlined the process for developers.

"They kind of are a one-stop shop for the developers to come to," Sloan says.

But wind associations often don't wait for developers to come to them. Instead, they market their blocked land to dozens of companies. Sloan says that can lead to bidding wars. Working with associations is potentially more expensive for developers, but ultimately, Sloan says, landowners in associations are better informed — they understand their contracts. She says that's good for the landowner and for the developer.

The Wyoming model is spreading to other Western states, including New Mexico, Kansas and Colorado. In Wyoming, there are now eight wind associations, including the ranchers in the Laramie Valley. Kathy Speiser says a wind lease might ease one of ranching's major burdens: unreliable income.

"It's not like a normal job where you get paid every month or every two weeks or whatever. You get paid once a year" when calves are sold, she says. But calf prices this year were the lowest since 2002, according to reports from the Livestock Marketing Information Center in Denver.

"Well, if we're going to continue doing this, we're going to have to find other ways than trying to make the old cow make all the payments," Rogers says.

Wind revenue should help, and Stumbough says if a wind project goes ahead, turbines are built, and transmission is available, a rancher's royalties could be hundreds of thousands of dollars a year. Everyone in the wind association would get a share — even those without turbines on their land.

Rogers says that sounds great to him and his neighbors who have a choice to make: whether they'd rather look out at a wind turbine or at a subdivision.