Accessibility links
'Hard Day's Night': A Mathematical Mystery Tour The jangly opening chord of The Beatles' hit has long frustrated amateur guitarists seeking to replicate it. So a Canadian mathematician used sound-wave analysis to figure it out. It appears that the Fab Four got by with a little help. 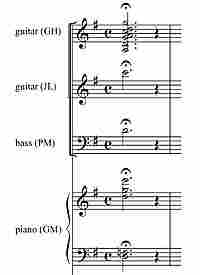 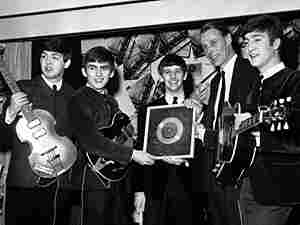 According to Jason Brown of Dalhousie University, the Beatles got by with a little help from their producer George Martin (second from right). Chris Ware/Hulton Archive/Getty Images hide caption

The jangly opening chord of The Beatles' hit "A Hard Day's Night" is one of the most recognizable in pop music.

Maybe it sounds like nothing more than a guitarist telling his bandmates, "Hey, we're doing a song here, so listen up." But for decades, guitarists have puzzled over exactly how that chord was played.

So a mathematician in Canada looked into how The Beatles produced that sound back in 1964, before the synthesizers and studio electronics available today. Host Scott Simon discusses the findings with the Weekend Edition Math Guy, Stanford professor Keith Devlin.

"Sounds themselves are very mathematical things," Devlin says. "And that was the key to unraveling this particular mystery of this sound."

Using sound-wave analysis based on the 1820s work of French scientist Joseph Fourier, Dalhousie University's Jason Brown deconstructed the opening chord with the help of basic audio-editing software. Brown found that it isn't purely guitar and bass, as previously assumed; he theorizes that Beatles producer George Martin played a five-note chord on the piano as well.

Brown isn't done with his musical sleuthing, either. Devlin says that Brown is now using Fourier-based analysis to determine who wrote certain Beatles songs whose true authorship is in dispute, such as "In My Life."

Click the link at the top of the page to hear the full interview with Math Guy Keith Devlin.