Accessibility links
Safer, More Efficient Stoves Spread In Latin America A stove designed by an engineer in Texas may go a long way toward replacing the dangerous and inefficient open fires used for cooking in poor villages around the world. Use of the Onil stove began in Guatemala, and demand for it is growing across Latin America. 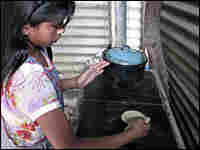 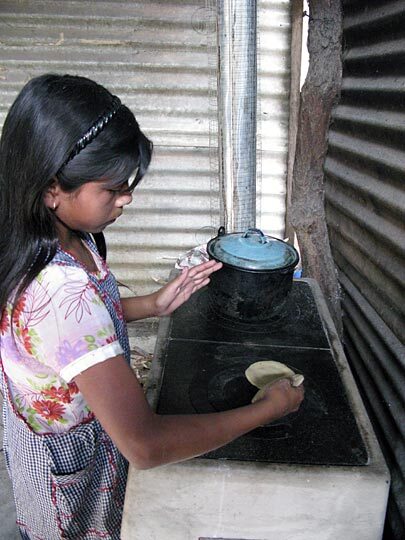 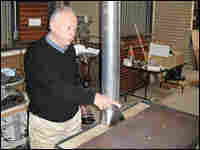 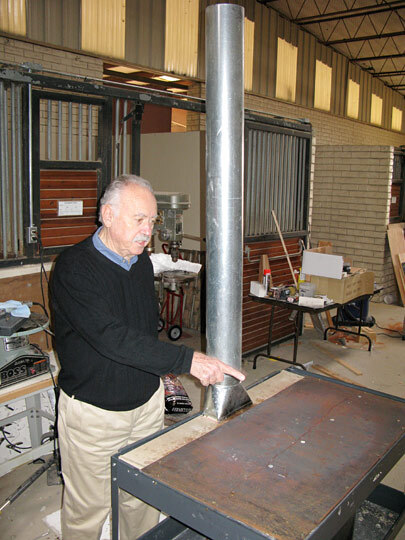 Don O'Neal, the retired mechanical engineer who invented the Onil stove (shown here in his workshop), is developing a new stove.

For a long time, one of the holy grails of rural development has been a simple stove to replace the dangerous and inefficient open fires used in villages around the world.

A stove designed by an engineer in Texas may be that wonder stove. Its use began in Guatemala. Now, its popularity is spreading.

Its story begins in North Texas, at the house of a 75-year-old retired mechanical engineer named Don O'Neal.

After an illustrious career helping to design computers in the 1960s, and then developing the first smoke detectors, fish finders and calculators, O'Neal retired in 1983 but found that he had too much time on his hands.

So he and his wife, Lois, started organizing medical missions to destitute villages in Guatemala. It was on those trips that he began to see families coming in with terrible burns.

"I'm not talking about burns that blister, I'm talking about burns that burn fingers off and ruin legs," O'Neal says. "A kid starting to walk in one of those huts with an open campfire in the middle of the floor plops down on all fours, sticks a hand in a bed of coals, and immediately the hand is burned off. It's a horrible sight. And we had kids doing face-plants in a bed of coals, ruining their lives."

In addition to the risk of burns, the houses are usually not ventilated — creating endless respiratory problems and carbon monoxide buildup. What's more, the open fire is inefficient, dispersing heat in all directions and requiring lots of firewood to keep it stoked.

So O'Neal invented a stove that solves all these problems. It's made of local materials: fired clay for the combustion chamber, poured concrete blocks for the structure, and a tin chimney to get the smoke out of the house. Then the inventor gave the design away and never earned a nickel.

About 1,400 miles south of O'Neal's home is the Mayan village of Alotenango, in the central Guatemalan highlands. Inside tin-roof kitchens, women are busy tortillando, or making tortillas.

Maria Rosario Chavac has had an Onil stove for about two months.

"Before, I had to leave every day to cut wood," Chavac recalls. "Now, it's saving me a lot of wood. Now, I only have to go out every four days to cut wood. The old fire used up wood faster. This stove is working well."

This is what women tend to notice more than the health and safety improvements. The stove requires 70 percent less wood, which saves labor and reduces deforestation.

Fernando Gamez works with Pro-Rural, a Guatemalan government anti-poverty agency that is a big supporter of the Onil stove. He says that because the stoves use far less wood than traditional fires, women are spending less time gathering wood, freeing them up to participate in a Pro-Rural program that teaches them how to sew and to do other handcrafts.

The popularity of the Onil stove is spreading.

An Iowa State University study comparing 22 of the world's cook stoves ranked the Onil No. 1.

According to Pro-Rural, 50,000 of them have been installed in Guatemalan homes, with plans for another 50,000. Helps International, a Texas-based charity that promotes the stove, moved into Mexico in the past year, setting up a stove factory in Toluca. Former President Vicente Fox is said to be an admirer.

The environmental ministry in El Salvador — where deforestation is severe — has begun distributing the stove. And there's interest in Honduras.

The challenge, of course, is how to get more of them to families who need them.

Richard Grinnell, Helps International's point man in Latin America, says that in truth, they need 1.5 million Onil stoves in Guatemala and 6 million in Mexico. He says the obstacle is not unwillingness to change traditional ways.

"Once they've seen how they work, I haven't gone to a community yet that hasn't said they want them," he says.

The challenge is one of priorities, Grinnell says. The Onil stove costs about $100. Though some nonprofits give the stove away, Helps International prefers selling it through a community microcredit corporation, so the family will value it more.

For a Guatemalan family that may earn $5 a day, $100 is a lot of money, and Grinnell says the biggest obstacles are cell phones and Coca-Cola — "because that's what they spend their money on."

He says what they need is more credit, and a bigger awareness campaign.

Meanwhile, O'Neal is keeping himself busy. After the booming success of his stove, he can't stay out of his workshop. Now he has invented a water filtration system, a bean cooker and an improved stove, all to ease rural poverty — all this from someone who designed computers that went into the first NASA rockets.