Accessibility links
Civility, a Bit of Wit on Display as Democrats Debate The eight Democrats seeking their party's presidential nomination met Thursday evening in South Carolina for their first debate. Moments of humor lightened the discussion, which was dominated by Iraq — and cordiality, as the candidates made their pitches to voters.

Civility, a Bit of Wit on Display as Democrats Debate

Civility, a Bit of Wit on Display as Democrats Debate 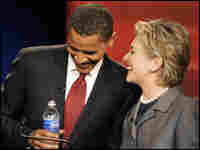 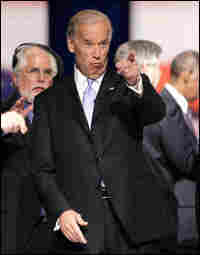 Sen. Joseph Biden of Delaware provided the night's lightest moment with his response to a question about whether he could keep his infamous verbosity in check on the world stage: "Yes" was his one-word response. Stan Honda/Getty Images hide caption

The eight Democrats who want to be their party's presidential nominee appeared on stage at South Carolina State University in Orangeburg on Thursday evening for their first debate in the 2008 race.

While the names of Sens. Hillary Clinton (NY) and Barack Obama (IL) and former Sen. John Edwards (NC) are quite familiar to most Americans, those of Sens. Joe Biden (DE), Chris Dodd (CT) and Bill Richardson (NM), Rep. Dennis Kucinich (OH) and former Sen. Mike Gravel (AK) are not. The South Carolina debate, broadcast nationally by MSNBC, gave the candidates an opportunity to introduce themselves to that vast majority of voters who have not yet decided which candidate to back.

Not surprisingly, Iraq was the most discussed topic; voters say it is the No. 1 issue, and it was credited with giving Democrats their majorities in both the House and Senate in last year's elections.

Iraq is also what usually unites the Democratic candidates: All oppose the war there, all oppose the surge, and all oppose President Bush's stated desire to veto the spending bill passed by Congress that includes a date for the withdrawal of U.S. troops.

Nonetheless, divisions among the candidates could be seen. One long-existing fault line divides those who voted to authorize the war in 2002 – including Clinton, Edwards, Biden and Dodd – from those who did not.

Kucinich – who made opposition to the conflict the key issue in his 2004 presidential bid – voted no. Obama, who was not yet in the Senate but a member of the Illinois state legislature, spoke out against the war from the start.

Edwards has said his vote was a mistake, and he again apologized for it. But in what some see as an ongoing snipe at Clinton, Edwards insists that those who voted yes should concede the error of their ways.

"Sen. Clinton," Edwards said in Thursday's debate, "and anyone else who voted for the war, has to search themselves and decide whether they believe they've voted the right way. If so, they can support their vote. If they believe they didn't, I think it's important to be straightforward and honest. Because I think one of the things we desperately need in our next president is someone who can restore the trust bond between the American people and the president of the United States."

Clinton has long been a target of anti-war protesters because of her refusal to apologize for her vote. On Thursday, she again acknowledged that the vote was wrong.

"I take responsibility for my vote," Clinton said. "Obviously, I did as good a job as I could at the time. It was a sincere vote based on the information available to me. And I've said many times that, if I knew then what I now know, I would not have voted that way."

Kucinich approached the issue another way. He said it is "inconsistent to tell the American people that you oppose the war and, yet, you continue to fund the war. Because every time you vote to fund the war, you're reauthorizing the war all over again."

The award for angriest candidate went to Gravel, the former two-term senator from Alaska, who has mostly faded from the scene since his 1980 defeat for re-election. Emulating the Howard Beal character in the movie Network, Gravel gave a scathing assessment of his fellow Democrats, at one point saying their actions regarding Iraq and their rhetoric involving Iran "frighten" him.

Prior to the debate, much of the anticipation centered on how Clinton and Obama, the ostensible frontrunners for the nomination, would approach one another. But the two took a conciliatory and, at times, complimentary approach with each other.

At points, they referred to each other by their first names, in approving tones. Referring to Obama's plan for Iraq, Clinton said: "I think that what Barack said is right.'' Obama, in turn, alluded to previous comments from "Hillary" in regards to voters' "hunger for change."

Some of the more interesting moments came when NBC's Brian Williams, the debate's moderator, addressed embarrassing or difficult moments for the candidates. Obama was reminded of his ties to a donor accused of having questionable ethics. Obama said his campaign has thousands of donors and he has denounced that particular one.

Edwards was asked about the seeming contradiction between his campaign's focus on poverty and the "two Americas," and the $400 haircuts he billed to the campaign. Edwards said he had made a mistake, and he readily agreed that he is privileged. But, in repeating a theme from his 2004 presidential bid, Edwards reminded the audience that his father worked in a mill all of his life, and that he did not grow up with money.

"The reason I'm running for president," Edwards said, "is so that everybody in this country can have the same kind of chances I've had."

Williams wanted to know why Richardson was "one of the last" to call for the resignation of Attorney General Alberto Gonzales. Richardson acknowledged that it was because Gonzales, like Richardson, is Hispanic, and he wanted to give the attorney general a chance. In another part of the debate, Richardson had to explain why he seems to be the favorite candidate of the National Rifle Association, and whether that comes at an awkward time, given the massacre at Virginia Tech. Richardson said that, as someone who hails from the West, gun rights and the Second Amendment are very important.

Dodd, facing Williams' charge that he has been "rather unabashed" about accepting money from lobbyists, defended his long career in Congress as one devoted to "public service."

The lightest moment came when Williams spoke to Biden. Mentioning that Biden has been accused of "uncontrolled verbosity," the newsman asked him whether he could convince voters that he would have the "discipline" to keep from yakking all the time.