Accessibility links
Protests Over Gaza Strikes Erupt In Muslim World As the death toll rises from Israeli attacks in the Gaza Strip, angry protests were held all over the Arab world. The demonstrators are angry not just at Israel, but at many of their own Arab leaders.

A Palestinian hurls a stone with a slingshot toward Israeli soldiers in the West Bank village of Azzun on Sunday during a protest against Israeli airstrikes on Gaza. Jaafar Ashtiyeh/AFP/Getty Images hide caption 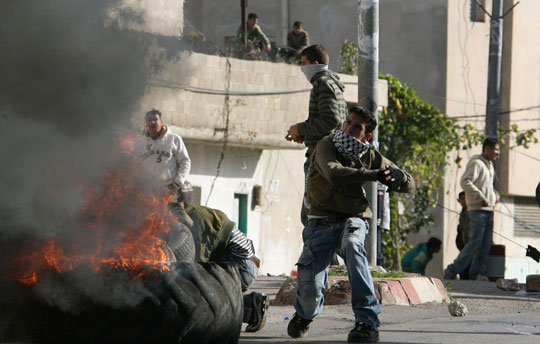 A Palestinian hurls a stone with a slingshot toward Israeli soldiers in the West Bank village of Azzun on Sunday during a protest against Israeli airstrikes on Gaza. 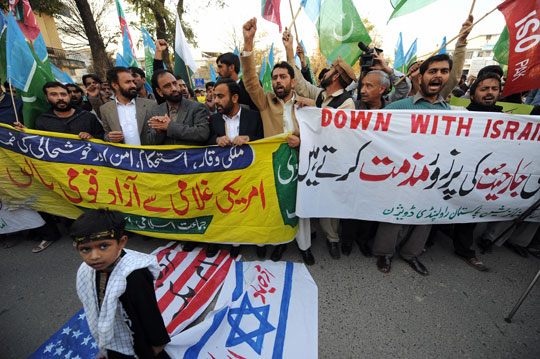 Pakistani Muslims shout anti-Israel slogans during a protest in Islamabad on Sunday against airstrikes in Gaza.

Angry protests erupted around the Arab and Muslim world and beyond, as the death toll in Gaza mounted Sunday. Demonstrators vented their fury at both Israel and the Arab leaders who in their eyes have put their own political concerns ahead of the Palestinian cause.

From Turkey to Indonesia, the calls of outrage rang out. After seeing hourly images of bleeding Palestinians, demonstrators took to the streets in Damascus, Amman and Cairo.

In Beirut, police had to use tear gas to get demonstrators to stop stoning the Egyptian embassy. Egypt has been sharply criticized for agreeing to keep its border with Gaza closed, thus in the eyes of critics aiding and abetting the Israeli blockade.

As Gaza hospitals were quickly overrun, Egypt ordered the crossing opened, but later blamed Hamas for failing to let wounded Palestinians out to receive treatment in Egypt. Finally on Sunday, the border was briefly opened, and ambulances and trucks filled with medical and humanitarian supplies rolled into southern Gaza.

The shock of the large-scale military operation has thrown into sharp relief Arab divisions that have been partially submerged under diplomatic rhetoric until now. One of the first to feel the glare was Palestinian Authority President Mahmoud Abbas, who came to Cairo and dismayed his Arab audience by blaming Hamas for the bloodshed in Gaza.

"Let me say this clearly. We contacted Hamas and spoke to them bluntly. We spoke to them on the phone and pleaded, 'Please do not end the cease-fire. Let it continue, so we can avert what has now happened.' And how I wish we had," Abbas said.

Abbas has always been a pragmatic politician, more interested in securing real achievements for his people than in being their hero. But today's comments prompted many Arabs to see him as siding with the Israeli-U.S. camp, alongside an uneasy Egypt.

In Iran, which has financed and supported Hamas for years, the Ayatollah Ali Khamenei issued a fatwa, or religious decree, ordering Muslims everywhere to defend Gazans "in any way possible." Hamas' leader-in-exile Khaled Meshaal was more specific. In an interview with the Al-Jazeera satellite channel, Meshaal sought to make this weekend the birth date of a third Palestinian intefadeh against Israel, to follow the uprisings of 1987 and 2000.

"There is no path except that of martyrdom — armed resistance and martyrdom operations. This is what will support Gaza. This is what will lift the oppression from you. We do not take up arms except in the face of the Zionist enemy. I call upon you to uprise. This is the time for the third intefadeh," Meshaal said.

Some analysts doubt the Palestinians are ready for another mass uprising, given the divisions between the secular Fatah movement and the Islamists of Hamas. But others wonder if the bloody events now unfolding in Gaza will inspire more violence, not less.