Accessibility links
Study: Tolerance Can Lower Gay Kids' Suicide Risk Gay young adults have one of the highest rates of suicide attempts, and kids who are rejected by their parents have the most problems. New research says when a parent is neutral about a son or daughter being gay, or even only mildly critical, that goes a long way in reducing a child's risk. 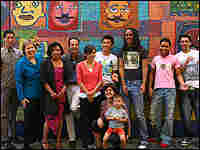 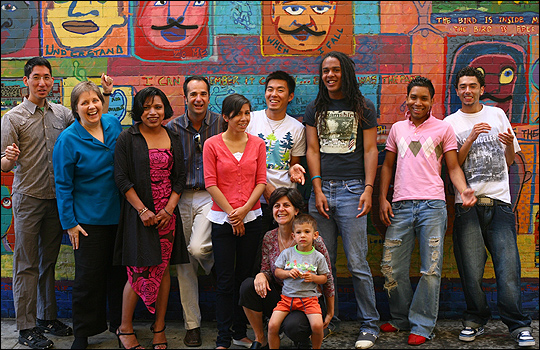 The staff at the Family Acceptance Project at San Francisco State University. FAP was developed by researcher Caitlin Ryan (second from left). 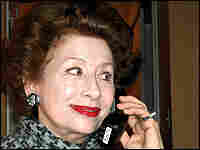 Leonor Holmstrom, on the phone with her daughter, became an advocate for gay kids and their families after struggling to accept her daughter's homosexuality. Martina Castro for NPR hide caption

Gay, lesbian and bisexual teens and young adults have one of the highest rates of suicide attempts — and some other health and mental health problems, including substance abuse. A new study suggests that parental acceptance, and even neutrality, with regard to a child's sexual orientation could have a big impact in reducing this rate.

The study, published in the journal Pediatrics, found that the gay, lesbian and bisexual young adults and teens at the highest risk of attempting suicide and having some other health problems are ones who reported a high level of rejection by their families as a result of their sexual orientation.

"A little bit of change in rejecting behavior, being a little bit more accepting," says lead researcher Caitlin Ryan, "can make a significant difference in the child's health and mental health."

Ryan, director of Adolescent Health Initiatives at the Cesar Chavez Institute at San Francisco State University, and her researchers conducted lengthy interviews with more than 200 gay, lesbian and bisexual young adults. Ryan tried to judge whether, as adolescents, they had faced low, moderate or high levels of rejection from their families.

Acceptance Can Go A Long Way

Because the level of rejection is hard to measure, Ryan looked at things like whether the parents tried to get their children to change their sexual orientation, or tried to stop them from being with other gay kids.

"Parents thought that by trying to change them, that would make them happy. But actually it put their children at great risk," Ryan says. "When we shared that with parents, they were shocked."

The study shows that just a little bit of acceptance can go a long way. That's what has other health researchers excited about Ryan's work, says Effie Malley, a senior prevention specialist at the federally funded Suicide Prevention Resource Center in Newton, Mass.

Malley has done her own research and released another study this month that shows that gay teens have very high rates of suicide attempts. She says parents matter — and so do peers, teachers and society in general.

"What I'd like to see down the road," she says, "is that parents and people who work with families counseling them would really take to heart Ryan and her co-authors' research about not trying to change who the parents are or their beliefs, but just to help them to recognize the words they use and the actions that are harmful to their kids and to stop using those behaviors."

Leonor Holmstrom of Los Angeles is a parent who has faced her own worries about having a gay child. She's an elegant 64-year-old with bright red lipstick and a ready laugh. She and her husband John went to Santa Rosa, Calif., Christmas week to visit their daughter Juliana, her partner and their two young children at a modest house tucked into a cul-de-sac, with colorful plastic toys across the small front lawn.

Fifteen years ago, after Juliana told her mother she was gay, Holmstrom figured she'd never have these grandchildren to spend Christmas with.

"I really didn't want her to be gay," Holmstrom says. At first, Holmstrom tried to hide that her daughter was gay from family and friends. Her church taught that homosexuality was a sin. She had a couple of friends who were gay whose lives, she says, were "disastrous." Mainly, she worried about her daughter's future.

At first, her daughter did suffer. She dropped out of college, dealt with depression and lived in poverty. But Holmstrom reached out to Juliana, who returned to college and then graduate school. Today, Holmstrom is close to her daughter, her daughter's partner and their family.

Now Holmstrom works as an advocate with PFLAG en Espanol, a group she helped start. She works with other Mexican-American and Latino parents of gay kids. The new research shows that gay males — particularly Latino males — report the highest levels of family rejection.

"I did a lot of things that I tell the mothers don't do, because I did them — and my daughter suffered because I did them," Holmstrom says. "She was acting like normal for her. And I think that's very damaging for a kid, because she's feeling one thing and you're telling her, 'Your feelings don't count or they're not right.' "