Accessibility links
Murals Depict Power Of Law And Justice There are more than 50 murals on the walls of the Justice Department headquarters building. Painted during the Great Depression, they aimed to show how law and justice could improve lives. 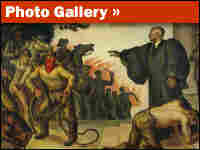 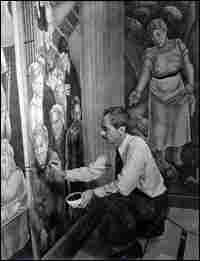 Artist George Biddle works on a panel of his mural, Society Freed Through Justice, during the 1930s. The mural is located in the fifth floor lobby of the Justice Department building. Courtesy of the Smithsonian hide caption

The Justice Department headquarters building has more than 50 murals on its walls.

Painted during the Great Depression, they aimed to show how law and justice could improve lives.

As Justice Department tour guide Winifred Hart once put it, "We drip symbolism in this building. This building is a sermon, a hymn to justice."

That hymn includes verses that are progressive, controversial and even radical. As expected, the building has flags, eagles and scales of justice. But there is also real art on the walls, showing America at its worst, and the redemptive power of law and justice.

In the 1930s, for example, the Justice Department installed a mural that showed black and white students being educated together. The painting showed a dream that democracy had not yet realized — the nation's capital was still a segregated city.

Virginia Mecklenburg is a senior curator from the Smithsonian American Art Museum.

"The whole scheme of all the murals was really a grand epic view of the role of law in American society," she says.

The Justice Department headquarters was built when America was struggling through the Great Depression. The country's most prestigious artists of the day competed to win commissions for paintings that would show how law and justice could make life better for everyone.

"These were going to be the shining stars that launched this program that they were hoping would put murals in post offices and federal buildings all over the country," Mecklenburg says. "It was a real initiative to take art to the American people."

One of the most arresting paintings in the building has a place of honor in the Justice Department. It hangs just above the main library, around the corner from the office where the attorney general works every day. It's an anti-lynching mural.

The painting, by John Steuart Curry, portrays a cowering, terrified man on the steps of a courthouse. A judge stands between the man and a lynch mob; the man at the front of the mob holds a rope; a raging flame burns in the background.

When Kennedy worked at the Justice Department in the 1950s, he and his colleagues would pass the mural every time they went to work on a legal brief in the library.

"We thought we were serving the cause of justice," Kennedy says. "And this thing said to us, 'It's not foolish or proud or vainglorious to think that you're participating in the noble work of American justice. This is what you're here for. Go to work. Do it better.'"

"This is art really doing its work," says Kennedy. "And it tells us what our country is really like. It's inescapably us: not somebody else, not the founders, not the 19th century. Because what illuminates the scene are two things: the flame of hate in the back, and the car headlights in the front."

Only the judge holds back the hatred from the man cowering on the steps.

One member of the lynch mob wears a dapper linen suit and a hat. In the back of the mob, two girls are waving; they look like they're having a good time. The man holding the lynching rope has his face covered; so does the man cowering on the steps. It's as if both the hunter and the hunted could be anyone.

When Curry painted this mural in the 1930s, lynching was a serious problem in America. Curry submitted one sketch after another to the fine arts commission. The commission kept rejecting the sketches and sending them back before finally settling on the design that now hangs over the library.

Curator Virginia Mecklenburg says there is "a very firm letter from a man named Edward Rowan, who was essentially running the mural program, saying, 'You're a terrific painter and we really like the ideas that you've talked about, but we can't accept these murals because we don't think they are your best work.'"

Those were tough words for one of America's top artists. Mecklenburg says there was so much riding on these murals; they were meant to launch a program that would inspire America and give the country hope.

"The Depression was awful; there were bread lines everywhere," says Mecklenburg. It was vital that the murals convey the message that "we really are a civilized society, and in the case of the Justice Department murals, everything having to do with law, that we can't slip back -- that it would be terrifying if we lost everything that we had achieved as we'd gone through the 18th, 19th and 20th century to build the institutions that guide our lives."

Now a new attorney general is about to go through confirmation hearings.

Eric Holder is set to be the first black attorney general in American history. When he walks through the halls of the Justice Department, he will pass all those murals, reminding him that this is his story and ours, and that his job is justice.