Accessibility links
In 'Public Places,' Lives of Quiet Desperation French filmmaker Alain Resnais is best known for his nonlinear art films — but 20 years ago he began adapting plays; his latest picture, Private Fears in Public Places, is based on a 2004 dark comedy by the British writer Alan Ayckbourn. 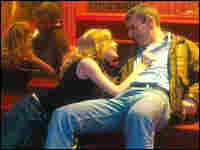 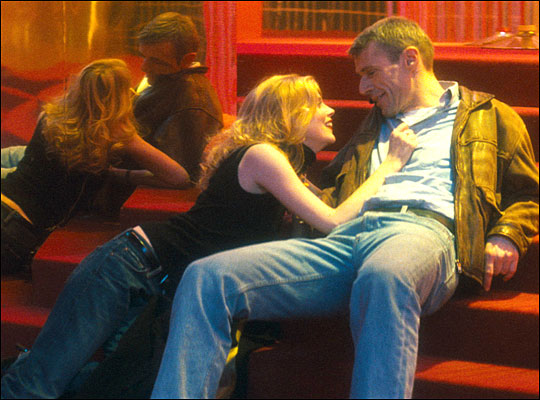 Before I tell you about Alain Resnais' newest masterpiece, I want to say a word about formalism — and what is sometimes called, slanderously, "style over substance:" In great cinema, there's no divide. The way the camera moves through space, how characters are framed in relation to one another and the world, the palette, the rhythms of the editing — they're not extrinsic to a movie's meaning. In Private Fears in Public Places — known in France as Coeurs, or "Hearts" — they are the meaning.

Resnais' film is a veritable essay in space and color. More important, it's a film in which those elements mirror the psychological space, the emotional color, of a bunch of deeply screwed-up people.

This isn't the elliptical Resnais of the fractured memory films Hiroshima, Mon Amour and Last Year at Marienbad. This isn't difficult; it's fluid, teasing, light on its feet. It's positively yummy. It's transcendentally yummy. It's based on a play by Alan Ayckbourn, an Englishman who knows his way around farce but has lately edged into more grown-up forms of sex comedy — or, in this case, sex comedy without actual sex.

Resnais has moved the story to Paris, where it unfolds against a gentle snowstorm; he uses a curtain of falling snow to break up every scene, and in fact this is a movie with many curtains. Resnais frames his characters through doorways and windows and cubicles — anything that makes physical the forces that keep people separate. Yet the film is never claustrophobic; the camera's drift creates layers of space, each layer its own little universe.

And as the title suggests, the main characters could hardly be more walled off. The movie opens with Laura Morante as a woman searching for an apartment to move into with her fiancé, played by Lambert Wilson, but the dwelling she's shown by realtor André Dusollier has been rather clumsily subdivided. The camera gazes down on the maze of little rooms from overhead, a perfect visual correlative for the movie to come.

The interiors are all creamy pastels — the critic Armond White describes them in pastry terms, as glacéed — but the extreme stylization has the effect of bringing the characters closer to us, since even at their most foolish they're on the same color spectrum.

The narrative baton is passed from lonely soul to lonely soul: The fiancé fastens himself to a barstool in a candy-colored basement hotel bar. (Anything to keep from facing the woman he's supposed to marry.) Back in the realtor's office, the older man gazes longingly at his radiantly tousled assistant, played by Sabine Azéma, who gives him inspirational videotapes to watch; they show her devout religious side, but when the pious programming runs out there's a blizzard of video static — snow again --and then a hot babe, maybe her, doing a striptease. While the realtor stares at this homemade porn loop, his lonelyhearts sister (Isabel Carré) ends up on a blind date at that bar with Wilson ...

And on and on the carousel goes. There are many crisscrosses in Private Fears in Public Places; they're laborious to describe but marvelously easy to watch. The 84-year-old director has stripped the movie down to pure elegance. It's not reductionist; it's about human beings trying to reach out from their own private spaces. And for two sublime hours, it's all we need of the world.

I urge you to see it on the big screen, but if it doesn't show up at your local art-house cinema, you have another option. The distributor, the Independent Film Channel, is offering the film via pay-per-view on many cable systems. I believe in seeing movies at theaters, but in a pinch, Private Fears in Public Places may be consumed, without fear, in private.