Accessibility links
Jazz Trumpeter Freddie Hubbard Dies Grammy Award-winning jazz musician Freddie Hubbard has died at the age of 70. He collaborated with such greats as John Coltrane and Sonny Rollins. Hubbard had been hospitalized since a heart attack last month. 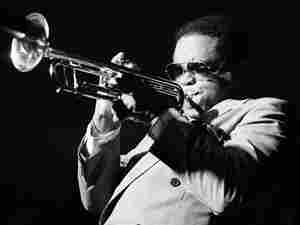 Jazz innovator Freddie Hubbard sometimes played his trumpet is if it were a saxophone. Philippe Levy-Stab / Corbis hide caption

Freddie Hubbard was one of the most powerful and lyrical horn players of the past 50 years. He was born in Indianapolis and mentored by his neighbor, guitarist Wes Montgomery. Hubbard moved to New York in 1958 and quickly rose to prominence as a member of Art Blakey's Jazz Messengers.

Freddie Hubbard had extraordinary chops, strong feeling and a progressive impulse. He recorded with some of the most forward thinking jazz stars of that era — John Coltrane, Sonny Rollins, Ornette Coleman, and Herbie Hancock among them. Hubbard also brought his melodic, experimental sound to more conventional sessions, such as Oliver Nelson's Blues and the Abstract Truth. In a 2001 NPR interview, Hubbard said that in the 1960s he didn't even think of his instrument as a trumpet.

Hubbard was generally acknowledged as an influence on his instrument second only to Miles Davis. While Davis was always more famous, Hubbard's 1970's albums such as Red Clay and Straight Life were more commercially successful than Davis's iconoclastic output of the same period.

Despite his popularity, or because of it, Freddie Hubbard was criticized for selling out in the later half of his career. He continued to tour the world, playing his horn until he split his lip in 1992. He did not take very good care of himself and the lip never healed properly. Still, he did not rest, and recorded several comeback albums with the New Jazz Composers Octet, assisted by a second trumpeter.

"I'm not going to play that way again," Hubbard said. "As far as giving up all the thirty choruses I used to play. And I used to play with such intensity — trying to play like Coltrane and play hard and long. I think now, I have to dig down and play with more soul."

Maybe he believed he'd never play that way again, but he never stopped trying. The National Endowment for the Arts named Hubbard a Jazz Master in 2006. He released a new album, On The Real Side, in June, 2008.