Accessibility links
Spike In U.S. Medevac Crashes Prompts Oversight Helicopter medevac flights in the U.S. killed 28 people in 2008, the most dangerous year on record. Officials say there is no common thread between the crashes, but the number of accidents has drawn the attention of Congress and the National Transportation Safety Board. 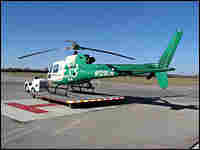 This EMS helicopter, owned by Air Methods Huntsville MedFlight, can seat four people and a patient weighing up to 350 pounds. The crew can be airborne within five minutes of receiving an emergency call. Russell Lewis/NPR hide caption 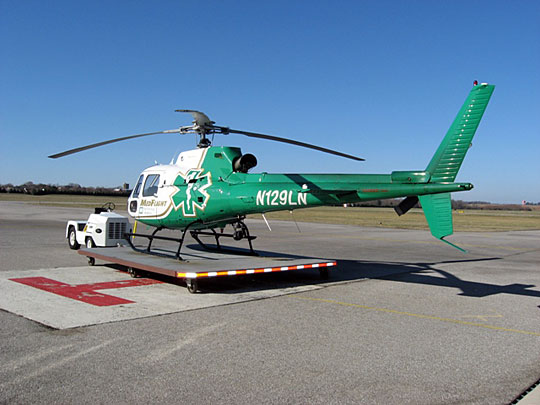 This EMS helicopter, owned by Air Methods Huntsville MedFlight, can seat four people and a patient weighing up to 350 pounds. The crew can be airborne within five minutes of receiving an emergency call. 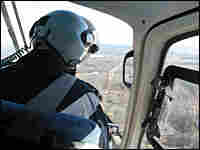 Three hundred feet above New Market, Ala., pilot Roy Sumja peers down at his landing spot during a training mission. He is looking for power lines and any other obstacles before setting down. Russell Lewis/NPR hide caption 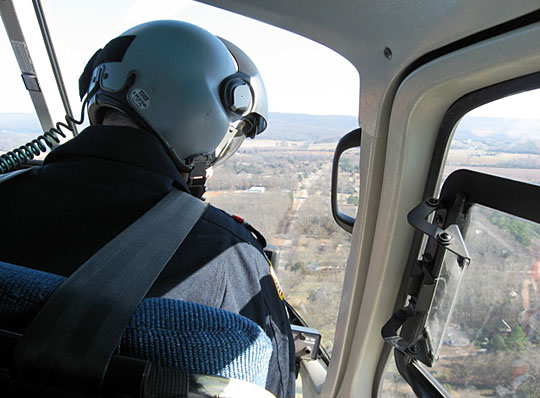 Three hundred feet above New Market, Ala., pilot Roy Sumja peers down at his landing spot during a training mission. He is looking for power lines and any other obstacles before setting down. 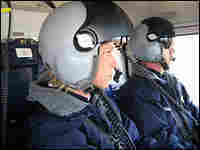 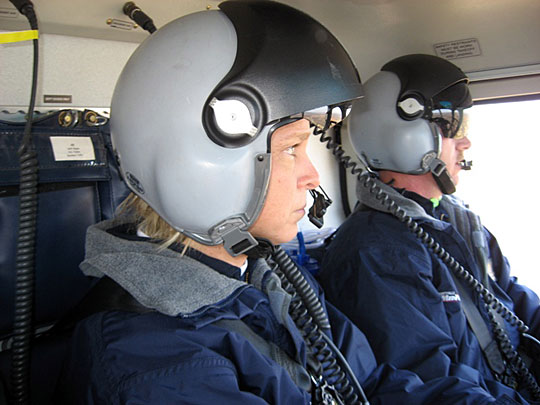 Imagine it's a dark, rainy night and your car skids off the highway. It's bad. Really bad. Bad enough emergency responders don't think an ambulance will get you to the hospital in time. You're lying on the side of the road when a bright light appears from above.

Your best chance of survival is an emergency helicopter. And what you don't know — what you'd rather not know — is that in 2008 these aircraft have killed 28 people in seven separate accidents.

This year has been the deadliest year for EMS helicopter crashes. There's no common thread in any of the crashes: bad weather, pilot disorientation and flight crew mistakes are some of the causes. But the record number of accidents has gotten the attention of the industry, federal aviation officials, safety experts and even Congress.

This year's fatal crashes have happened at night, during the day, in good weather and bad. Pilots have flown into tower guy wires, lost control in the clouds and, in the worst accident, two EMS helicopters collided in mid-air above Flagstaff, Ariz.

"There's an acceptance in the world of emergency medical aviation that there's going to be some death involved. That's wrong. That's wrong headed. It's immoral. It's bad math," says Christine Negroni, an aviation safety expert.

Negroni and fellow researcher, Pat Veillette, have worked to compile an accident database going back to 1987. They found more than 200 EMS helicopters have crashed, killing 202 people. This year's fatalities, 28, are twice as many as any past year, according to the Comprehensive Medical Aviation Safety Database, a product of Humanitarian Research Services.

"This is a business that is supposed to be going out saving lives and when we have people that are actually losing their lives, not only is it tragic, but it is downright sad," said National Transportation Safety Board member Robert Sumwalt.

"Because aircraft sitting on the ground aren't making money, the dollar will always be the bottom line on these operations," said Veillette, a former EMS pilot and author on the emergency medical industry.

In the past eight years, the fleet has doubled to 900 aircraft. Most are operated by private companies and stand to make a healthy profit. The typical EMS flight costs around $10,000.

On a recent flight above Madison County, Ala., pilot Roy Sumja demonstrated what a typical EMS mission is like. Federal health privacy rules prohibit reporters from flying on a real emergency. Sumja's crew of paramedic and nurse sat in the back while he prepared to fly to a mock accident scene.

Dispatchers tell the crew where to go, but nothing more. They don't want that to affect the pilot's decision-making.

It's not until the helicopter has lifted off before the crew gets information about the patient. In this case, a car accident about ten miles away.

A helicopter is inherently unstable. The pilot has to keep both hands and feet on the flight controls. He must navigate by peering out the window and using instruments, monitor several radio frequencies and look out for trees and power lines.

Once he got to the accident site, Sumja circled above the scene. His nurse, Rhonda Bailey, calls out obstacles.

The helicopter lands safely and then it takes off again for a hospital. Back at the airport, Sumja says safety comes first. He never feels pressure to start a mission or continue one if the weather deteriorates, he says, but this year's deadly accidents have made him pause.

"If we ever took any chances, we're certainly probably not taking them now," Sumja says. "We really err on the side of safety. If there's any question, we just don't go."

'Not Always An Easy Fix'

Aviation experts say what could save lives is if the government forced helicopter operators to install cockpit equipment that would warn pilots about terrain, mandate night-vision equipment and even require a second pilot.

The industry concedes more needs to be done to protect the patients and flight crews. But it won't be an easy or inexpensive fix.

The NTSB has made safety recommendations to the Federal Aviation Administration for years — recommendations that could have saved lives — but the agency hasn't instituted them, saying it is a slow, bureaucratic process.

"They take time because we want to be certain that anyone affected by it has an opportunity to comment on it. You want to seriously consider the comments and move forward to a final action."

But 2009 may be the year of change. The House Transportation Committee may take up the matter, as will the NTSB.

"Whatever is being done out there now is not working successfully," said the NTSB's Sumwalt, who will chair NTSB hearings in February to try to figure out why an industry that's designed to save people's lives is killing them at record levels.