Accessibility links
Giuliani's Remarks? 'Outrageous' and Familiar Former New York Mayor Rudy Giuliani's assertion that the nation will "suffer more losses" from terrorism if the Democrats win in 2008 is outrageous. But it was no less outrageous when it worked in 2004 for President Bush. 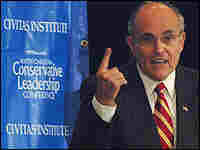 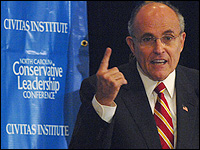 Rudy Giuliani has, for a couple of months now, argued that he is the best candidate to be our next president because he performed so well as mayor of New York in the immediate aftermath of 9/11.

All right. But now he's taken that assertion one step further — I would argue, one step too far. It was the other evening in New Hampshire, that Giuliani said that if the Democrats are elected in 2008, the country will "suffer more losses" from terrorism.

Once again, a Republican candidate for president — currently the leading Republican candidate for president — is making what is really an outrageous charge. It is no less outrageous now than it was when George Bush used it to win re-election in 2004. But it worked back then; and clearly Mr. Giuliani thinks that he, too, can ride this pony to the White House.

By dishonestly linking the events of 9/11 to Saddam Hussein, President Bush constructed a platform on which the war in Iraq was built. He also turned Osama bin Laden into an international superstar; and his organization, al-Qaida, into the biggest worldwide franchise since McDonalds.

One might think that the questionable success of the war in Iraq, the failed hunt for Osama and the spread of al-Qaida and its affiliates might raise questions in Mr. Giuiliani's mind about implicitly promising more of the same.

Perhaps, indeed, focusing on police work and intelligence gathering, employing economic, political and diplomatic tools and emphasizing American law and traditional values in the fight against terrorism lack some of the dramatic values that attend a more conventional war.

Democratic candidates have, in the past, recommended many if not all of those tactics. So, too, have some of our most senior military leaders.

Instead of tarring the entire field of Democratic presidential candidates, Rudy Giuliani needs to offer some viable policy options.

He appears to believe that more of the same will lead to victory. Politically, he may be right. As far as the country's safety and welfare are concerned, I doubt it.