Accessibility links
U.S. Navy Wants Landing Strip in Birds' Backyard The U.S. Navy has been trying for several years to build a practice landing strip for F-18 Hornet fighting jets in coastal North Carolina. But birds — a lot of birds — are getting in the way. 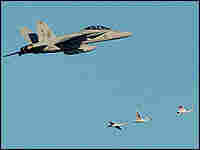 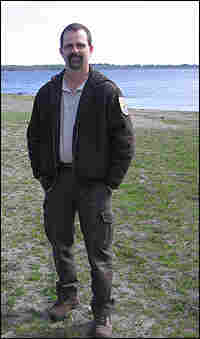 Howard Phillips manages the Pocosin National Wildlife Refuge, which is only several miles from the site of the Navy's proposed landing strip. He worries that the jets would chase away the tundra swans and snow geese that the refuge is supposed to protect. Elizabeth Shogren/NPR hide caption 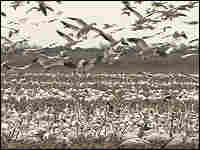 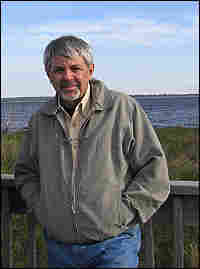 Joe Albea, who makes wildlife television programs in North Carolina, is one of the lead opponents of the landing strip. Elizabeth Shogren/NPR hide caption

The U.S. Navy has been trying for several years to build a practice landing strip for F-18 Hornet fighting jets in coastal North Carolina. But there's already a lot of flying going on in the area—not by planes, but by birds.

Hundreds of thousands of tundra swans and snow geese spend their winters in the area, feeding on farmers' fields and resting at the Pocosin National Wildlife Refuge.

For years, bird lovers and local farmers have been fighting to keep the jets away. They say the training strip would endanger the birds, pilots and this rural community's way of life. North Carolina Gov. Michael Easley joined the opposition earlier this year and, just recently, so did the state's two senators.

But, so far, the Navy has not backed down.

"We want an outlying landing field to train our pilots, and that's critical," says Dan Cecchini, the Navy official in charge of analyzing the environmental impact of the proposed airstrip. "And we owe it to our men and women, who go out in harm's way, to give them the best training we can."

Cecchini says that Hornet pilots, who land their jets on aircraft carriers, have one of the most dangerous jobs in the military. The new landing strip would serve as a mock carrier, where pilots would make more than 30,000 touch-and-go landings each year. The Navy needs the strip, so it can keep a lot of pilots trained and ready to go, he adds.

The Navy's top choice for the location of the airstrip is a flat, rural area in eastern North Carolina. Farm fields stretch out as far as the eye can see--some emerald green and full of ankle-high winter wheat, others black with naked soil ready for the next planting.

The Navy prizes the location because it's so remote, 50 miles west of Nags Head and other popular beach resorts and 130 miles east of Raleigh. With few lights at night, a landing strip here would be a good simulation of a carrier floating on a dark ocean, Navy officials say.

But critics say that pilot training would harm migratory birds. Tundra swans migrate all the way from Alaska and spend several months in the area.

"These are big birds. They'll weigh on an average 16 pounds, up to 23 or 24 pounds for a big adult," says Joe Albea, a television producer who makes wildlife shows.

"It will turn a green wheat field to white. It will actually look like snow," Albea says.

Snow geese also come to the area in huge numbers from as far away as Greenland.

"It will take your breath away to see 80,000 snow geese come off a lake in a 10-minute period. I mean, (there are) not too many places on the continent where you can see that," Albea says.

[The big, white birds fly back and forth between the fields and the nearby refuge all winter, Albea says, and that will put them in the way of the jets, which is dangerous for the birds and the pilots.

Howard Phillips, who runs the Pocosin National Wildlife Refuge, also opposes the strip and so does his agency, the Federal Fish and Wildlife Service. One concern is the noise from the jets; another is a Navy plan to buy 50 square miles of farm fields and get rid of the crops the birds eat.

Phillips says the Navy hasn't done enough research to be able to tell him that the birds and the refuge will be OK.

"That uncertainty causes us a great deal of nervousness because this is our mission, this is our function," he says.

If the birds leave, the refuge loses its main reason for being and the main reason people visit, Phillips says.

Phillips has a lot of company.

Farmers, hunters and state politicians also oppose the strip. Hundreds of them showed up at a hearing earlier this month in the tiny town of Plymouth.

Some drove tractors decorated with posters, others brought homemade Hornet jets 10 feet long. So many people wanted to speak that the meeting stretched until after midnight.

Phyllis Ange blasted Navy officials for threatening to take her family farm and considering any means necessary to chase tundra swans away, including poisoning them.

"It is time for you, Navy, to wake up and admit you've made a mistake," Ange said. "... How can you even think about poisoning the birds? Are you that cold-hearted just to get what you want? Will you ask for forgiveness and leave our community alone?"

Then Bunny Sanders took the microphone and addressed four uniformed Navy officers at the front of the room.

"Should we expect you to care about your own Navy pilots that you will intentionally and knowingly put them in harm's way? You know as well as we do that 30-pound birds with 7-foot wingspans and jets are a recipe for disaster," said Sanders, the mayor of Roper, one of the closest towns to the proposed landing strip.

After hearing the comments, Cecchini defended the Navy's plan.

"For anyone to suggest that we would put a landing field in a location where we would jeopardize pilot safety, that's just not something the Navy would do," he said.

He admitted that the risk of birds striking planes in the area is "severe."

"We hear people say, 'It's not a matter of if, it's just a matter of when.' And that's absolutely true. Wherever the Navy flies, the Air Force flies, and at commercial airports, there are bird strikes that happen every year. And some airfields have greater bird-aircraft strike potentials than others," Cecchini concedes. "This is the one big issue at this site."

But Cecchini says that the Navy can control the risk. He says the key will be stopping farmers from growing winter wheat, and getting them to plow under leftover corn and soybeans.

"These birds are tied to the food source," he says. "You eliminate the food source, and then the birds will not be there. So, the Navy feels very confident that even though there are lots of birds, thousands of birds at the refuge, it can co-exist safely with that refuge."

Cecchini says if controlling the fields is not enough, the Navy will use fireworks, air cannons, dogs and possibly poison to keep the birds at bay.

But Ron Merritt, a safety consultant, thinks the Navy underestimates the danger to pilots. Four years ago, he studied the bird problem for the Navy. Now, he speaks out against the landing strip.

"I don't want to have to read in the paper that an F-18 crashed, and we killed a pilot--because we will. It's just a foregone conclusion," Merritt says.

Merritt used to head the U.S. Air Force's effort to protect planes from birds. He says he's seen too many pilots killed by birds to keep quiet.

"I did 12 accident investigations, and when you start cleaning up wreckages and you pick up pieces of a pilot, you get this commitment," he says. "I'm not going to let that happen again."

Merritt says there's no way to protect a jet from tundra swans, because they're like flying bowling balls.

"You'd have to build a flying tank to keep them out. I mean, this isn't a criticism of the jet. I mean, they have to be built light in order to fly," he says.

The Navy is weighing all the comments, and it's looking at four other possible sites in North Carolina for its landing strip. Officials say they hope to have a final decision by the end of the year.