Accessibility links
The Yankees Are, Once Again, Bad Sports By asking a struggling New York City for an additional $259 million in tax-free bonds to help finance a new stadium (while signing free agents for well over $400 million), the Bronx Bombers present themselves as the very model of arrogance and let-'em-eat-cakeness.

Listen
The Yankees Are, Once Again, Bad Sports 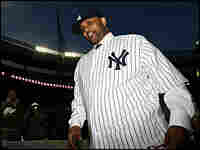 Pitcher C.C. Sabathia walks off the field at the new Yankee Stadium in mid-December after announcing that he had signed with the New York Yankees. He scored a seven-year, $161 million deal. Nick Laham/Getty Images hide caption 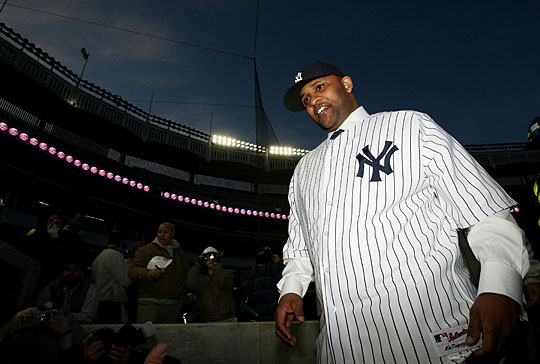 Pitcher C.C. Sabathia walks off the field at the new Yankee Stadium in mid-December after announcing that he had signed with the New York Yankees. He scored a seven-year, $161 million deal.

As the seconds tick away in 2008 and we cast our eyes toward the new hope that 2009 surely offers us, may we pause to give thanks to that one entity that has already contributed so much to the new year ahead.

I am referring, of course, to the New York Yankees, who are providing us Americans with what we sorely need — someone we all can despise.

This is a hard time, after all, for hate to flower. Even Newt Gingrich has declared that the Republicans would be wise not to attack the incoming Democratic administration. The Democrats couldn't even bring it upon themselves to chastise the smarmy, two-faced Joe Lieberman. Tom Cruise is playing a Nazi, but he's a nice Nazi. And who can hate OPEC when oil is now cut-rate?

So, yes, thank the Lord for the Yankees. With their seats selling for as much as $2,500 a game while they ask a struggling New York City for an additional $259 million in tax-free bonds to help finance their new stadium and while they sign free agents for well over $400 million — far more than the other 29 major league teams have spent cumulatively — the Yankees present themselves as the very model of arrogance and let-'em-eat-cakeness. Henceforth, I will be calling the Yankees the Antoinettes. You may wish to, as well.

Now, the pinstripers have always been able to boast that large numbers of Americans have loathed them. It is just that this recent display of conspicuous consumption and premium pricing has taken detesting, as we are wont to say, to a new level.

Let's give the devil his due. The Bronx Bombers play by the rules. They pay their luxury tax on time and without whining. One of their executives even says the team's fans view the Antoinettes as a "sacred trust," and that part of the attendant liturgy is that the club will pour profits back into inventory — even if it means bidding against itself.

But still, there is a point, whether the economy is boom or bust, when one team's extravagance is so gross that it tarnishes the sense of competition. The New York dominance a half-century ago severely diminished the whole American League. It was the Yankees and the seven dwarfs.

The financial spectacle that the Antoinettes have put on display this off-season really does come close to trampling on the spirit of the game. In sport, the prime idea should be to be for our team — not against the other fellows. The Antoinettes, by their excess, imperil that emotional equation and risk doing damage to the very thing they seek to dominate.