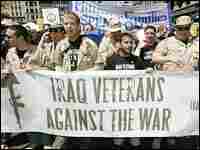 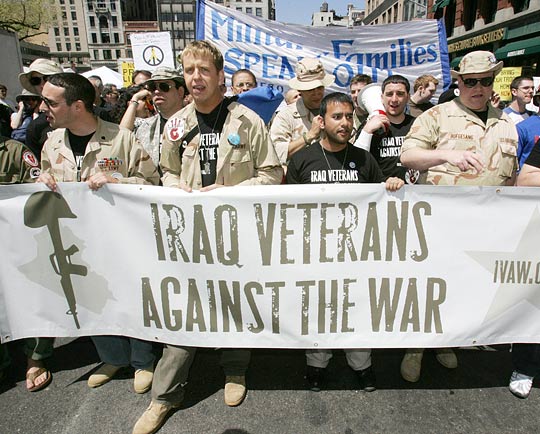 Members of the U.S. armed forces are prohibited from speaking out against the war in Iraq. The Uniform Code of Military Justice limits what soldiers may say about political issues.

But as opposition to the Iraq war mounts, some service members are finding ways to air their opinions. Some are speaking anonymously while others sign a petition.

Comments like this would land him in a military prison if he were identified.

"As long as we're here, we're decimating our own military," the Army officer continues.

It's his second tour in Iraq, and he explains that his problem with the war is that soldiers don't know whom to fight.

"There's no clearly defined enemy; we're not fighting a military. The insurgents are terrorists. Everybody we're shooting is technically a civilian," the officer says.

He said he has opposed the war since he shot a civilian during his first deployment. His convoy hit a roadside bomb and in the ensuing chaos, he opened fire on a passing vehicle.

He explains: "We were shooting at everything and a vehicle came up behind us fast and we thought it was a secondary attack so I fired into the vehicle and I hit somebody. I didn't mean to. The vehicle was full. I had no idea."

Several months later, he was back in the United States and signed a petition calling for a withdrawal from Iraq. It's known as the Appeal for Redress, and all of the signatories are active-duty servicemen and servicewomen.

Nearly 2,000 troops have signed the petition, most of them veterans of the Iraq war. There are about 1.4 million active- duty personnel in the U.S. military.

The Appeal for Redress enables service members to appeal to their congressional representatives to end U.S. military occupation in Iraq. The first set of signatures was delivered to Congress on Jan. 16, to coincide with the national observance of the birthday of Martin Luther King Jr., the slain civil rights leader who often spoke out against war.

Lt. Cmdr. Mark Dearden, a naval surgeon who served two tours in Iraq, says members of Congress would move faster to end the war if their relatives were there.

"I don't see enough questioning by people who don't have family members in the military or who aren't being asked to sacrifice anything," Dearden says.

The campaign is not without critics, including military bloggers and members of Congress, including Sen. Jack Reed (D-RI). The Pentagon does not publicly comment on the Appeal for Redress.

The petition drive, which began in October, is led by Jonathan Hutto. The 29-year-old Navy petty officer found a loophole in the Uniform Code of Military Justice called the Military Whistleblower Protection Act. It lets any member of the military legally petition his or her member of Congress for any reason without fear of punishment.

"I don't believe the Iraq war has provided freedom for the people of Iraq," he tells a modest crowd during a recent lecture in Richmond, Va. "The people of Iraq right now are caught up in a vicious civil war and our troops are caught in the middle of it.

"There's mayhem, sectarian violence claiming too many lives," he adds, as members of the crowd nod their heads in agreement.

Hutto has served one tour in Iraq and is signed up for the Navy through 2010. While he fiercely opposes the war he says he expects to return to the Persian Gulf sometime next year, when his unit is called back.