Accessibility links
Yo Yo Ma Reflects on Rostropovich The cellist Yo Yo Ma looks back at the life of master cellist Mstislav Rostropovich, who died Friday at 80 at a Moscow hospital. Ma credits Rostopovich for invigorating the cello repertoire, both as a performer and through dozens of new works commissioned from great composers.

Listen
Yo Yo Ma Reflects on Rostropovich

The cellist Yo Yo Ma looks back at the life of master cellist Mstislav Rostropovich, who died Friday at 80 at a Moscow hospital. Ma credits Rostopovich for invigorating the cello repertoire, both as a performer and through dozens of new works commissioned from great composers.

The cellist Mstislav Rostropovich is being remembered as a man of passion, enormous energy and talent. Rostropovich died today in Moscow at age 80.

BLOCK: Rostropovich told an interviewer several years ago: All my life I wanted to play music with love to every member of the audience. Even if I have played the Dvorak Concerto thousands of times, every time I reached the final pages I have tears in my eyes. It is so beautiful.

Mr. MSTISLAV ROSTROPOVICH (World-renown Cellist and Conductor; Former Musical Director, National Symphony Orchestra): We raise our talent just this connection, emotional connection to this people. I think for each performer, that's very important how our people who are coming to our concerts, how feel this people? Happy these people or not happy?

BLOCK: Rostopovich was born in Baku, Azerbaijan, studied cello with his father, who had studied under Pablo Casals and learned piano from his mother. The family moved to Moscow when he was young. He would go on to study with both Dmitri Shostakovich and Sergei Prokofiev. He was a fierce and public defender of dissident writer Alexander Solzhenitsyn, who today called his friend's death a bitter blow to our culture.

Rostropovich and his wife left the Soviet Union in 1974 and were stripped of their citizenship. Rostropovich, whom his friends called Slava, was musical director of the National Symphony Orchestra in Washington D.C. for nearly 20 years. And when he went back to Russia for the first time in 1990, the first thing he did was go to visit the grave of Dmitri Shostakovich.

BLOCK: It was this 1961 recording of Rostropovich's playing a piece written for him by Shostakovich. His first cello concerto that electrified a 15-year-old budding cellist named Yo Yo Ma.

Mr. YO YO MA (World-renown Cellist): That recording just made my hair stand on end. I couldn't sleep that night.

Mr. MA: I think it was the combination of energy and to a player, a cellist, a fellow cellist, the impossibility of what he was doing on the instrument beyond physical ability. There was a kind of will power that was so grand and it is overwhelming. You know, this - it's kind of a reality distortion. You enter into that - his sound world or you see him in person and something happens and you fall under the spell.

BLOCK: You came to work with him many times over the years?

Mr. MA: I first met him in 1976, so I've known him for about 31 years. He came to college and gave a master class. And boy, he took no prisoners. He immediately zeroed in on my weaknesses and proved to me that I didn't know what was happening in the score even though I was trying to wiggle out of admitting it, and basically it's one of those things where someone comes in to your life and tells you the things that other people have been telling you but because it's that person it makes you pay attention much more.

And then I played with him at the National Symphony, the next year. And over the years, we would visit - he would give me advice about music with offers, sort of, to a secret program to the Lutoslawski Concerto, which he commissioned.

In many ways his generosity was practical often. Just say, you know, you do this. You go to a city, this is the way you need to play or project and in that sense I was very grateful I still am very grateful for those personal interactions.

BLOCK: Was it the kind of thing that even late in his life when your own career had clearly skyrocketed that you were still able to learn things from him?

Mr. MA: I think one of the great things about being a musician is that you never stop learning. And I think one of the things Slava used to say he would say that I went to three universities - the universities of Prokofiev, Shostakovich and Britten. And it was his deep friendship and working relationship with these three men that opened different kinds of knowledge world to him.

And I think he's always a proponent of continuous learning. I think to the very end he was premiering new works in which - it was absolutely amazed me. You know, at 51, it's hard for me to learn new pieces but he would not only learned them and he would memorized them and of course ingest them in such a way that, you know, he would owned the pieces.

Mr. MA: As a cellist, I just have to say we're all so incredibly grateful to him because single-handedly he changed the landscape of the cello repertoire by adding maybe 40 percent to it. And teaching fabulous students that actually are inspired artists as well as really nurturing teachers.

BLOCK: I've been listening to his 1991 recording of the "Bach's Cello Suite," which he recorded in a church in Vezelay, France. And I've been noticing his breathing and you get a sense, I do, as listening to this, of the huge life force going through him as he plays.

Mr. MA: Yes. That life force, I think comes from intention and thought. So it's not just technique but it's much more what he aimed the narrative that he wants us to understand. So playing Bach at the Vezelay Church in Burgundy, it's a great wine region, one of the great cathedrals. It's typical Slava that he would record it in this kind of place but that recording also is so suitable for Bach in the creation of, essentially, a musical cathedral. But that's because of the way that he thought, and I think it's the way that he lived his life. He had a huge appetite for life and I think what he gives to us in his music is what he terms, he called himself a foot solider in the service of music, and I think of him in that sense it would be the foot soldier reporting on the triumphs and tragedies of the world.

BLOCK: Yo Yo Ma, thanks very much for being with us.

BLOCK: Yo Yo Ma remembering his fellow cellist, Mstislav Rostropovich, who died today in Moscow at age 80. He will be buried in Novo-Devichy Cemetery, which also holds the graves of his teachers Dmitri Shostakovich and Sergei Prokofiev. For a guide to Rostropovich's recordings and to watch a video of him playing Bach go to npr.org. 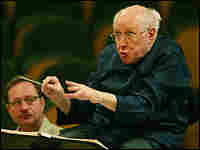 Russian orchestra conductor and cellist Mstislav Rostropovich during a rehearsal for a concert in Barcelona in May 2004. Cesar Rangel/AFP/Getty Images hide caption 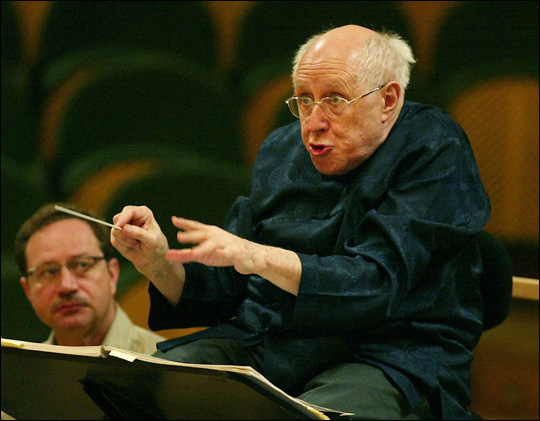 Russian orchestra conductor and cellist Mstislav Rostropovich during a rehearsal for a concert in Barcelona in May 2004.

He was a gigantic virtuoso, but one who threw caution to the winds to such an extent that the cause of drama and the intensity of the music itself were uppermost 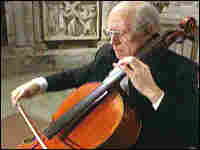 A guide to some of Rostropovich’s essential recordings

20 years ago Weekend Edition Saturday produced this profile of Rostropovich at age 60. 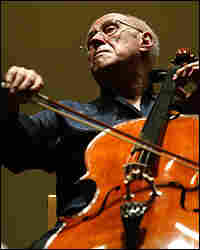 Russian cellist and conductor Mstislav Rostropovich, who courageously fought for the rights of Soviet-era dissidents and later triumphantly played Bach suites below the crumbling Berlin Wall, died Friday. He was 80.

A spokeswoman for the master cellist did not immediately provide other details surrounding his death.

Rostropovich died in a Moscow cancer hospital, the Itar-Tass news agency reported. He is reported to have suffered from intestinal cancer.

He served as the conductor of the National Symphony Orchestra in Washington, D.C. for nearly 20 years during his exile to the U.S.

President Vladimir Putin visited the ailing musician in the hospital earlier this year — an indication of both the respect Rostropovich has earned as a cultural figure and how much the political landscape has changed since he was exiled from the Soviet Union in the 1970s.

Rostropovich leaves a legacy that is artistic and political. As a cello soloist he was a friend and muse to many of the most important composers of the 20th Century.

The longevity and path of his career can be seen in some of the many honors Rostropovich was awarded, including the Lenin Prize, the Stalin Prize and the U.S. Presidential Medal of Freedom.

In an interview with National Public Radio in 1987, Rostropovich recalled a conversation with his mother, describing, in his heavy accent, his hands as a beautiful gift.

"My mother carried me for 10 months. I tell her, 'Mother you have extra month, why you not make for me beautiful face?' And mother tell me, 'My son, I was busy with make you beautiful hands," he said.

Both of his parents were accomplished musicians. His father was a cellist who had studied with Pablo Casals, the great Spanish cellist and conductor.

In 1943, young Rostropovich entered the Moscow Conservatory, where he studied with Dmitri Shostakovich. The composer wrote two cello concertos for Rostropovich.

Rostropovich had a thriving career as a soloist in the 1950s and 1960s, including performances and recordings outside of the Soviet Union.

Cellist Lynn Harrell says the first time he saw Rostropovich perform, his passion and ferocity were reminiscent of a forest fire.

"He was a gigantic virtuoso, but one who threw caution to the winds to such an extent that the cause of drama and the intensity of the music itself were uppermost," Harrell said.

Rostropovich also took chances politically, in the controlling atmosphere of the Soviet Union under Leonid Brezhnev, which ended up getting him into trouble.

In the early 1970s, he not only provided housing for the dissident writer Alexander Solzhenitsyn for four years but also wrote a letter that circulated in the West protesting Soviet treatment of the author. As a result, his concert appearances were drastically cut, and his wife, soprano Galina Vishnevskaya, lost her job at the Bolshoi Opera.

In 1974, they were granted exit visas, and while out the country were stripped of their citizenship.

Rostropovich adopted the United States as his home in exile. He served as the conductor of the National Symphony Orchestra (NSO) in Washington, D.C., from 1977 to 1994.

And in a dramatic reversal, in 1990 President Mikhail Gorbachev reinstated the couple's citizenship, and Rostropovich triumphantly returned to his homeland on tour with the NSO, where he was greeted enthusiastically at the Moscow Conservatory.

Rostropovich told NPR the visit reminded him of when the Berlin Wall had come down.

"I have feeling that my heart now is together — two half of heart now together," he said.