Accessibility links
Tale Of 'Defiance' Among The Third Reich's Targets Two brothers kept 1,200 Jews alive in the forests of Belarus during World War II. Edward Zwick's drama retells their story — and the film is best when it's honest about their tense relationship.

Listen
Tale Of 'Defiance' Among The Third Reich's Targets 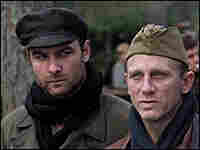 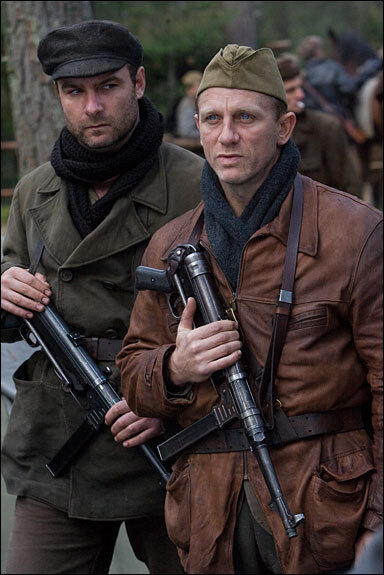 Brothers In Arms: Liev Schreiber and Daniel Craig are a fractious fraternity in Defiance.

One of the lazy cliches of too many Holocaust movies is that Europe's Jews were exterminated without offering any resistance. Historians know that there's evidence to the contrary — as Edward Zwick's new film Defiance demonstrates.

It's the story of the Bielski brothers, who kept 1,200 Jews alive in the forests of Belarus during World War II. The Bielskis were so contentious they not only fought the Germans, they fought each other.

The strongest part of Defiance, frankly, might be those fraternal conflicts. We meet the Bielskis, played by Daniel Craig and Liev Schreiber, in 1941, when they discover that the invading Germans have killed their parents and have likely put a price on their own heads as well.

Zus Bielski, one of Schreiber's strongest film portrayals, is the wild hothead of the family. He's filled with a burning desire for "blood for blood" revenge, as well as smoldering class resentments against the Jews who looked down on the Bielskis until they needed their help.

His brother Tuvia, well-played by Craig, is capable of cold fury when it's called for, but he's more of a stoic than is Zus.

He also feels more of a responsibility than his furious sibling does to protect the helpless Jews who've escaped to the woods from urban ghettos.

Defiance, however, often departs from the harsher realities of this core story and traffics in earnestness and sentimentality. There's too much on-the-nose dialogue and wisecracking-through-tough-times talk.

It all feels like stuff we've heard before, and hearing it in the middle of a Belarus forest doesn't improve it enough. When it's being true to itself instead of generic — just as the Belskis were — is when this film's at its best.