Accessibility links
Overview: Developer Targets Florida's Panhandle Florida's largest private landowner is turning its attention to developing the state's last untapped region — the panhandle. Environmental groups are concerned about the effect on the region, especially on the water quality in its productive fishing areas. 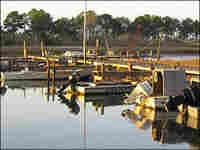 Oyster boats ready to go out for a day on Florida's Apalachicola Bay, one of the most productive estuaries in the United States. Greg Allen, NPR hide caption 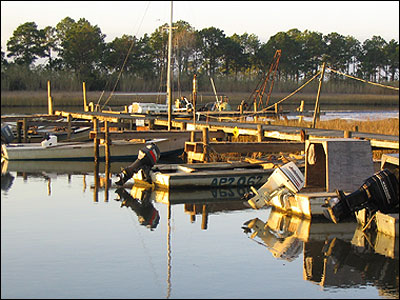 Oyster boats ready to go out for a day on Florida's Apalachicola Bay, one of the most productive estuaries in the United States.

Florida's panhandle is sometimes called "the Forgotten Coast." It's an area of sandy beaches, pine forests, wetlands and meandering rivers. It's one of the most diverse ecosystems in North America and Florida's last untapped region. But that's beginning to change.

Since the 19th century, when Henry Flagler built his railroad, the story of Florida has largely been written by developers. It's a land rush that began on the Atlantic side of the state — culminating in the megalopolis that extends from Miami to Palm Beach.

Development booms have already reshaped the Gulf Coast and central Florida. Thirty years after Walt Disney announced that he would build a theme park in Orlando, central Florida is still the state's fastest growing region.

Ten years ago, the St. Joe Co., a timber and paper business founded by a member of the DuPont family, made a decision that will help determine the future of Florida's panhandle. St. Joe announced it was getting out of the paper business and reshaping itself as a real-estate company. It would begin using its land for people, not paper.

St. Joe transformed overnight from Florida's largest private landowner to one of its biggest developers. In a three-part series, I explore the implications of that transformation.

With so much land — more than 800,000 acres — and so much history, St. Joe wields a lot of power in Florida. As I report in part 1, the company has built some of the nation's most innovative planned communities, relying on principles of "new urbanism" and developing in some communities its own architectural style — something the company calls "Cracker Modern."

But it also cuts a wide swath in Tallahassee. Last fall, the Florida Legislature approved a deal to pay $46 million to St. Joe for roads in the panhandle — roads that will serve areas where St. Joe is busy developing new communities. St. Joe's political clout in the state is the subject of part 2.

St. Joe thinks regionally — and part of that thinking is behind the company's support for a new airport proposed near Panama City in the heart of St. Joe's holdings. The company donated land for the airport as part of its strategy to "build value" in its property, improving infrastructure and, at the same time, the value of its land.

Part 3 of this series looks at concerns raised by environmental groups. They worry about the effects of large-scale development on the area, particularly how it will affect water quality in estuaries and bays that are some of the most productive fishing grounds in North America.

The St. Joe Co. has won awards for its developments and has been lauded by some environmental groups for its conservation policies. But at the same time, it's opening Florida's "last frontier" to development — on a scale that hasn't been seen in Florida since the days of pioneers like Flagler.