Accessibility links
Blagojevich Appoints Obama's Senate Successor Embattled Illinois Gov. Rod Blagojevich on Tuesday appointed a successor to fill the Senate seat vacated by President-elect Barack Obama. The move set off an avalanche of criticism from members of both political parties and set the stage for more political drama.

Illinois' embattled Governor Rod Blagojevich on Tuesday appointed a successor to fill the Senate seat vacated by President-elect Barack Obama. The move set off an avalanche of criticism from members of both political parties and set the stage for more political drama. 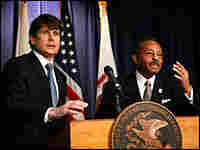 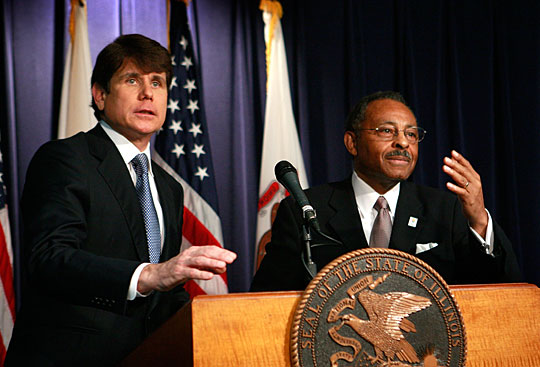 It wasn't long after Illinois Gov. Rod Blagojevich's arrest for allegedly planning to sell President-elect Obama's Senate seat to the highest bidder that politicos began guessing at the identity of those top-tier candidates for the post. Longtime Chicago Democrat Roland W. Burris' name never made it to anyone's list.

Nonetheless, on Tuesday, in defiance of Senate leaders — including Illinois Sen. Dick Durbin — who have vowed to reject any Blagojevich Senate appointment, the governor named to the post the 71-year-old lobbyist and three-time unsuccessful candidate for the party's gubernatorial nomination.

Three decades ago, Burris became the first African-American elected to statewide office in Illinois. And though he recently characterized as "appalling" the activities that led federal prosecutors to charge Blagojevich with bribery and conspiracy, he appeared at the governor's side at the afternoon press conference. Burris said that Blagojevich extended his offer Sunday, "and I said yes."

A Good Move That 'Isn't Going To Work'

Practically speaking, Burris' appointment appears to have little chance of success. But politically, Blagojevich has made a move that could make Democratic leaders, including Senate Majority Leader Harry Reid, at least a bit uncomfortable.

Burris has raised money for the governor and served on his transition team. In appointing him, Blagojevich moved to keep an African-American in the seat: Until his resignation, Obama had been the only current black senator.

The importance of that gesture was underscored at Tuesday's press conference. Eight-term Illinois Rep. Bobby Rush, a long-ago member of the Black Panthers who now represents the South Side of Chicago, took to the stage to endorse the appointment.

"Thank God for this decision," said Rush, who defeated Obama in his first run for office, in 2000. "Roland Burris is worthy. He has not in 40 years of public service had one iota of taint on his record as a public servant."

Dick Simpson, a former Chicago alderman who is now a political science professor at the University of Illinois, Chicago, characterized the appointment as a "very good political move, but one that isn't going to work." In addition to Senate leaders, who reiterated Tuesday that they won't seat a Blagojevich appointment, the Illinois secretary of state has said he won't certify the appointment, and state legislators are contemplating impeaching the governor.

"If a blue-ribbon process had been followed to choose the appointee, [Burris] certainly would have been acceptable," Simpson says. "And he has the advantage that he's African-American."

In a statement, Obama called Burris "a good man" but said Blagojevich's decision to make the appointment was "extremely disappointing."

There is a point of view, as expressed by former Republican Illinois Gov. Jim Thompson on All Things Considered Tuesday, that the Illinois secretary of state has no power to refuse certification and the Senate has no power to refuse to seat an appointee who meets constitutional requirements. These are issues that may have to be determined in court, particularly if the Senate ends up with multiple appointments for Obama's former seat.

James Nowlan of the Institute of Government and Public Affairs at the University of Illinois, Urbana-Champaign, says that Burris is generally seen in Illinois as a "decent and capable guy — but someone who never achieved the political success he wanted."

"The Senate now will have to reject the appointment not on the credentials of the candidate but on the situation of the governor himself."

'Humbled' To Be Tapped

Born in the small town of Centralia in southern Illinois, about an hour's drive east of St. Louis, Burris graduated from Southern Illinois University and received his law degree at Howard University.

A bank examiner and state management services director, Burris became the first black elected to Illinois statewide office in 1978, when he won his first of three terms as state comptroller. In 1991, he again broke ground when he was elected the state's first black attorney general.

But his remaining political career was one of disappointment. He failed in three attempts for governor, the most recent a primary loss in 2002 to Blagojevich. He also lost to Paul Simon in a 1984 primary for U.S. Senate and to incumbent Richard Daley in a 1995 primary for Chicago mayor.

With partner Fred Lebed, another former state comptroller, Burris runs a lobbying/consulting firm out of Chicago. He is also of counsel to and shares office space with his son's law firm, Burris, Wright, Slaughter & Tom.

Burris has a long list of memberships and awards. Earlier this year he donated $100,000 to his alma mater, Southern Illinois University, to fund scholarships for black liberal arts undergraduate students from the Centralia or Chicago metropolitan areas.

Earlier this month, Burris had indicated he would be willing to serve out the two years remaining in Obama's term and not run in 2010. At Tuesday's press conference, he said he was "humbled" to have the opportunity to serve in the Senate. But his loyalists are no doubt calculating whether this unorthodox path to Washington, and a future linked to a scandal-plagued governor, will lead to honor or humiliation.