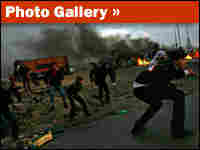 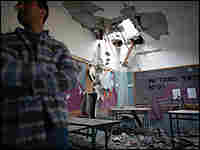 An Israeli looks at the damage from a Palestinian rocket that hit a classroom at a high school in Beersheba, Israel, on Wednesday. David P. Gilkey/NPR hide caption 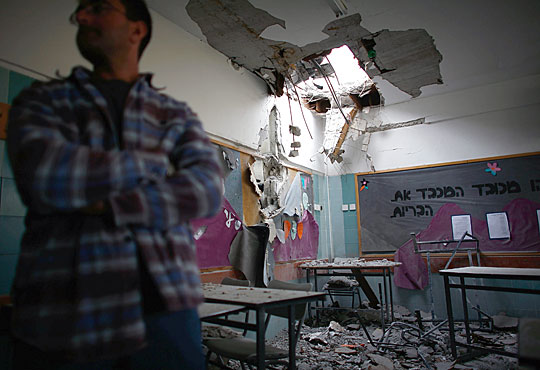 An Israeli looks at the damage from a Palestinian rocket that hit a classroom at a high school in Beersheba, Israel, on Wednesday. 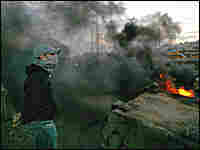 Palestinian youths pushed debris into the roadway to block traffic during a rally Tuesday at the Qalandiya Israeli manned checkpoint, located between the West Bank city of Ramallah and Jerusalem. David P. Gilkey/NPR hide caption 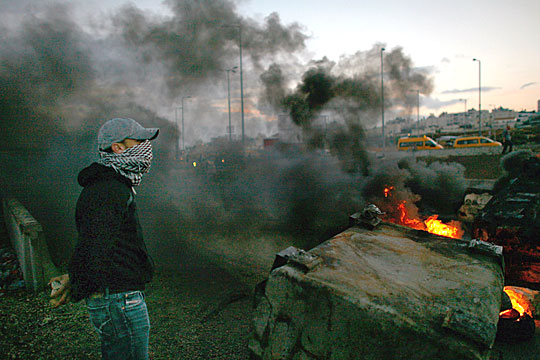 Palestinian youths pushed debris into the roadway to block traffic during a rally Tuesday at the Qalandiya Israeli manned checkpoint, located between the West Bank city of Ramallah and Jerusalem.

Israel continued air and naval bombardment of the Gaza Strip on Wednesday after rejecting a French proposal for a two-day cease-fire to allow food and medical supplies to reach the besieged region.

With basic food supplies running low in Gaza and hospitals struggling to handle the casualties, France's foreign minister proposed a 48-hour lull to allow vital aid to enter the territory and be delivered to its 1.5 million residents.

Senior Israeli leaders discussed the idea and rejected it.

One who asked not to be named told NPR that "giving Hamas a break now to regroup and rearm is a mistake."

"It's important to keep the military pressure on Hamas; that's the whole point of this operation," he said.

Hamas has also previously rejected talk of a truce that does not include Israel reopening all of the border crossings to allow goods to flow into the territory.

Meanwhile, at an emergency meeting in Cairo of the 22-member Arab League, foreign ministers blamed Palestinian divisions for opening the door to Israel's punishing attacks.

Saudi Foreign Minister Saud al-Faisal said divisions between the Palestinian Authority, which controls the West Bank territory, and rival Hamas militants were also hindering any effective Arab response to what he called "this terrible massacre."

Along the heavily fortified Gaza border fence, Israeli tank crews prepared for battle while Islamist militants, hiding as little as a few hundred yards away, laid land mines and other booby traps in case a ground war breaks out.

About 100 trucks of supplies were scheduled to enter Gaza on Wednesday. U.N. officials said, however, that the shipment falls far short of what is needed and that without a cease-fire, it is too dangerous to deliver much of the food and medical relief.

Nearly 400 people, mostly Palestinians, have been killed in five days of cross-border fighting, making the current conflict the deadliest in the Gaza Strip in four decades.

Bush voiced concern about the strikes in Gaza and the attacks in Israel and also raised again his worries about civilian casualties in Gaza, Johndroe said.

Asked specifically what concern the administration voiced about the violence of recent days, Johndroe said: "President Bush is disappointed that Hamas continues to fire rockets on the innocent people of Israel."

He said as far as a new cease-fire is concerned, "The onus is on Hamas."

European powers have also increased pressure on both sides to halt hostilities, but public anger in Israel over the widening of the rocket attacks to include Beersheba, 24 miles from the Gaza Strip, could move the government to hit Hamas even harder.

In Paris, French Foreign Minister Bernard Kouchner repeated his call for an immediate end to the fighting and said a cease-fire allowing humanitarian access "has to be permanent and it has to be respected" because previous truces had failed.