Accessibility links
This Is Home Majora Carter believes you don't have to move out of your old neighborhood to live in a better one. Carter was raised in the South Bronx and spent years trying to leave. But when the city proposed a waste facility there, she was inspired to fight for her community.

Listen
This Is Home 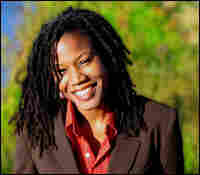 I believe you don't have to move out of your neighborhood to live in a better one.

I'm from the South Bronx. At 7, my neighborhood was the beginning and end of my universe. It was a small town to me, my own version of Mister Rogers' Neighborhood — maybe a little rough around the edges. Everyone knew each other, so if you got into trouble in school, chances are your mom knew about it before you got home. I felt watched over. I felt safe.

But just before I turned 8, things began to change. I watched two buildings on my block burn down. I remember seeing my neighbor Pito go up and down the fire escape to get people out. Where were the firemen? Where was the truck? Somebody must have called them.

That same summer, after serving two tours in Vietnam, my brother was killed in the South Bronx. He was shot above the left eye and — we hope — died instantly.

People who could, moved out of the neighborhood, and all I wanted to do was get out, too. I used education to get away from there, and got good at avoiding the topic of where I was from. To be from the South Bronx meant that you were a pimp, a pusher or a prostitute. It felt like a stain.

After college, I didn't want to come back to the South Bronx, but in order to afford graduate school, I had to. I was almost 30 and could only afford to live at my parents' home. It felt like a defeat, and I hated it.

At the same time, the city was planning a huge waste facility here, and no one seemed to care — including many of us who lived here. They were like, "Well, it's a poor community, what's the difference?"

I was outraged. It propelled me to act. It moved my spirit in a way that I didn't know was possible. And it changed my beliefs — it changed the way I felt about myself and my community. I worked hard with others who felt the same way and together, we defeated the plan.

After that, I realized it's just as important to fight for something as it is to fight against something. So we dreamed up a new park on the site of an illegal garbage dump — and after many community cleanups, along with $3 million from the city, we have one. And it's glorious. It was the seed from which many new plans for our community have grown.

Today, the South Bronx is no longer a stain; it's a badge of honor for me. I believe that where I'm from helps me to really see the world. Today, when I say I'm from the South Bronx, I stand up straight. This is home, and it always will be.