Accessibility links
Mingus Big Band: A Rousing, Raucous Concert The Mingus Big Band puts its own stamp on the music of legendary bassist Charles Mingus in concert from the Jazz Standard in New York City. Its repertoire comes from three seminal albums (Mingus Ah Um, Mingus Dynasty and Blues and Roots), all issued 50 years ago. 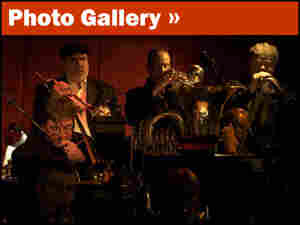 The Mingus Big Band rang in 2009 with a rousing and raucous 80-minute set before a sold-out crowd at the Jazz Standard in New York.

The group keeps alive the legacy of the great bassist and composer Charles Mingus, and for this special concert, it revisited music recorded 50 years ago. In 1959, Mingus released the albums Mingus Ah Um, Mingus Dynasty and Blues and Roots, all of which are jazz classics. For New Year's Eve, the Mingus Big Band picked tunes from those records to showcase Mingus' diverse repertoire, including everything from gospel hollers and church music to lush ballads, swinging dance tunes, bebop and the blues.

The Mingus Big Band is a hot band at any time, and on this night, it added extra star power, featuring Ku-umba Frank Lacy on trombone and vocals, Randy Brecker on trumpet, Vincent Herring on sax, Dave Kikoski on piano and Jeff "Tain" Watts on drums. The music is, like Mingus himself, earthy, passionate, soulful and intense — and at all times swinging. From the first throbbing bass notes by Boris Koslov in "Gunslinging Birds" to the animated trombone and vocals of Ku-umba Frank Lacy in "E's Flat, Ah's Flat Too," and the roaring full-band choruses that close out "Wednesday Night Prayer Meeting," the Mingus Big Band was on.