Accessibility links
Looking Forward To The New Year In Iraq Army Capt. Nate Rawlings has been sharing his experiences in Iraq with NPR over the last year. Madeleine Brand speaks with Rawlings about how he celebrated the new year in Baghdad and what 2009 may bring for United States soldiers in Iraq.

Listen
Looking Forward To The New Year In Iraq

Army Capt. Nate Rawlings has been sharing his experiences in Iraq with NPR over the last year. Madeleine Brand speaks with Rawlings about how he celebrated the new year in Baghdad and what 2009 may bring for United States soldiers in Iraq.

From the studios of NPR West, this is Day to Day. I'm Madeleine Brand. Iraqi forces took control of Baghdad's Green Zone today. Iraq's leaders celebrated the moment, saying the country's sovereignty has been returned six years after U.S. forces invaded and toppled the regime of Saddam Hussein.

BRAND: Thank you. Well, so how do soldiers there in Iraq - how do they mark the new year?

Capt. RAWLINGS: Well, New Year's, like Christmas, is another workday for us. We've had our normal patrols and all of our normal missions going on. What we like to do, though, is to shift some of the administrative requirements from our day-to-day activities a little bit to later so that we can give the soldiers some time to rest and do the little things like watch a movie, play video games, just enjoy a little bit of time with their friends and platoon mates.

BRAND: And how do the Iraqis celebrate?

And the loudspeakers on a lot of the mosques are broadcasting prayers pretty much all day and all night. So that makes it a little bit interesting when we try to sleep, but we know that that's a real large holiday for them, as well.

BRAND: Right. So I don't know if you can characterize it, but what's the general mood there among the soldiers as the year turns?

Capt. RAWLINGS: Well, a lot of the soldiers are really looking back on this year as one where we've made tremendous progress. My unit in particular, when we left at the end of 2006, things were really rough, and there was a lot of sectarian violence. And we really didn't know which way this thing was going to turn.

And when we returned at the beginning of this year, in the beginning of 2008, we could really see that the sectarian violence was beginning to abate, and that's continued tremendously throughout this year. So we've been able to focus a lot of our efforts on stability operations and infrastructure and just helping with building up the government and the local government forces there. So it's been a really good, positive year, and I think that the soldiers all the way down to the lowest level can see that progress.

BRAND: And the Status of Forces Agreement, known as SOFA, went into effect today, and that among other things mandates the withdrawal of all U.S. troops from Iraq by 2011. Are people talking about that? And how is it affecting them?

Capt. RAWLINGS: Well, the SOFA basically states that we will be continuing to work with the Iraqi forces for the remainder of the time that we're here. And it has set a timeline, but our timeline to come home really hasn't changed even according to that. But a lot of the troops now are looking towards the future, knowing that they'll probably wind up going to Afghanistan.

So right now, the schedule of deployments, we don't really know how far out that's going to go, and so people are just sort of looking towards getting our job done here and then heading home to their families.

BRAND: And I've also read that most of the changes, at least initially, will take place at the Green Zone, where Iraqis will be in charge as of today.

Capt. RAWLINGS: I believe that's right. We're about five miles south of the Green Zone. And so for our operations, we continue to conduct our operations with the Iraqi security forces, and so not a lot has changed on our level there. But we'll continue to work closely with all the Iraqi forces in all of our operations throughout Baghdad.

BRAND: And, Nate, when are you coming home?

BRAND: And now, my producer tells me that you are - when you return, you're looking into going into possibly journalism. Is that true?

Capt. RAWLINGS: Absolutely. I've had a wonderful experience getting to really collect a lot of the thoughts from this experience and interview a lot of my fellow soldiers and officers and found that I really enjoy collecting those interviews and collecting everyone's thoughts for pieces and putting them down into writing, and so I'd love to be able to continue that.

And I think it's a really interesting time in journalism. It's a tough time right now because we're sort of moving from the idea of print journalism and subscriptions into a lot of online readership. But from what I've read, readership online and viewership online is really skyrocketing. So now, you can get those stories out to a much larger audience, which I think will be a great and beneficial aspect in the next couple decades.

BRAND: Yeah. Is there any area you want to focus on when you get back? Any particular subject matter?

I think that the next four to eight years of the Obama administration are going to be incredibly interesting, with a lot of the diplomatic efforts to just to try to put a lot of the things back together. Certainly, what's going on now in the Gaza Strip is incredibly interesting, as well. So I think, once I learn the business and learn a lot of skills, I'd love to go abroad as a foreign correspondent someday.

BRAND: Army Captain Nate Rawlings with the First Brigade Combat Team of the 4th Infantry Division joining us from Baghdad. And it's been great speaking with you. Have a great new year.

Capt. RAWLINGS: Thank you. Happy New Year to you, too. 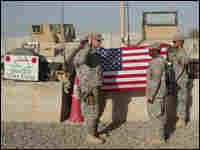 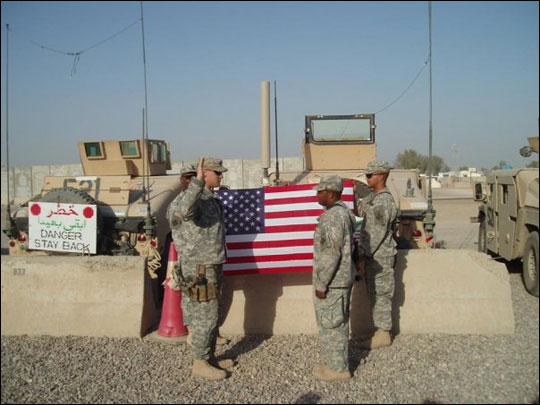 Capt. Nate Rawlings salutes one of his soldiers who decided to reenlist.