Accessibility links
Blitzen Trapper: Ramshackle Roots-Rock A genre-bending indie-rock band with a bluesy twang and country-fried riffs, Blitzen Trapper wears its influences proudly. The group's latest album, Furr, has been a favorite of critics, who've placed it on many "Best of 2008" lists.

Blitzen Trapper On Song of The Day 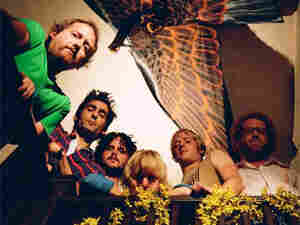 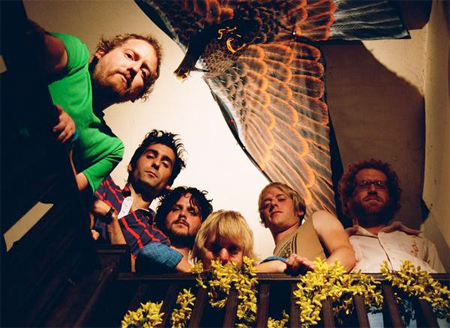 Blitzen Trapper's newest album, Furr, has found a place on many music critics' "Best of 2008" lists.

In the last few years, Blitzen Trapper has picked up an enthusiastic following for its explosive live performances and infectious roots-rock swagger. With a genre-bending indie-rock sound — infused with the bluesy twang of The Band and the country-fried psychedelic riffs of The Allman Brothers — the group from Portland, Ore., clearly wears its influences proudly.

Rolling Stone magazine even called Blitzen Trapper "the best Grateful Dead knockoff in forever." And while the title is true in some respects, it shortchanges what the band is doing.

Blitzen Trapper's latest album, Furr, finds the group paring down its frenzied energy in favor of concise, memorable songs full of folk-influenced guitars and banjos, chirping synths and the occasional melodica. The record has been a favorite among music critics, finding a place on many "Best of 2008" lists.

Eric Earley, Blitzen Trapper's lead singer and songwriter, recently sat down to describe the band's distinctively ramshackle music. He says that the song "Black River Killer" brings together an assortment of ideas while drawing from Cormac McCarthy-style narratives. But he adds that the song was also based on his uncle — his father's lost brother.

"[He] was a criminal, a junkie and a really sweet guy," Earley says. "He was the guy with the big beard and stained T-shirt that was always playing Rolling Stones records in my grandfather's back shed. And as I got older, he disappeared when my grandfather died. I kind of always had this mythical view of Tom."