Accessibility links
Helper Parrots, Guide Horses Face Legal Challenges Chances are you've seen a blind person accompanied by a guide dog. But what about a guide horse or a monkey trained to help an agoraphobic? Non-traditional service animals help many people with disabilities, but a new proposal would ban them. 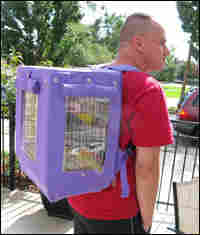 Jim Eggers carries his parrot Sadie around with him in this cage converted into a backpack. Rebecca Skloot hide caption 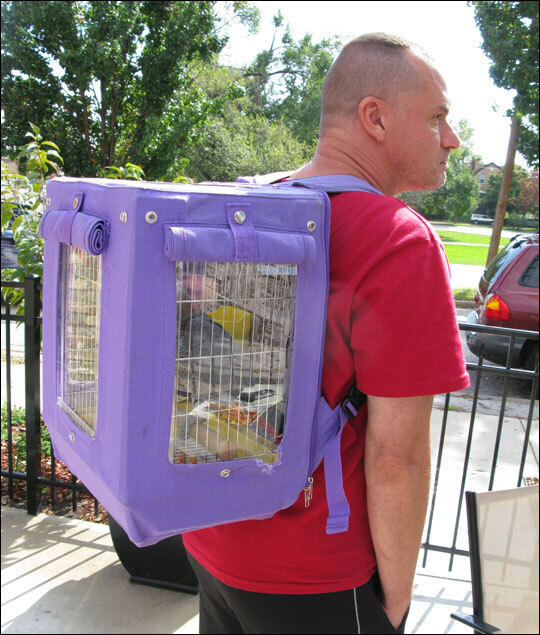 Jim Eggers carries his parrot Sadie around with him in this cage converted into a backpack. 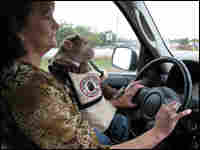 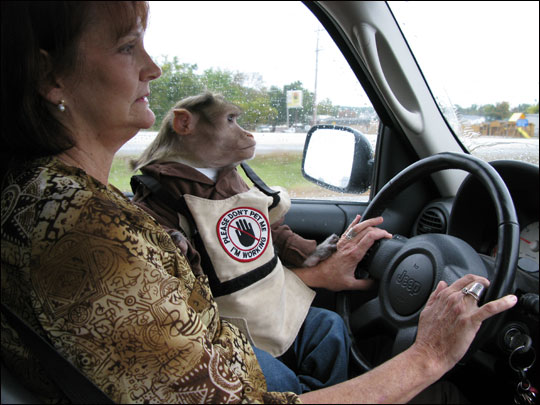 Richard, a bonnet macaque monkey, helps Debby Rose get through the day without debilitating panic attacks. Read more about him on our blog. 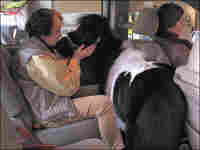 Ann Edie, who is blind, relies on Panda to guide her through her daily activities Rebecca Skloot hide caption 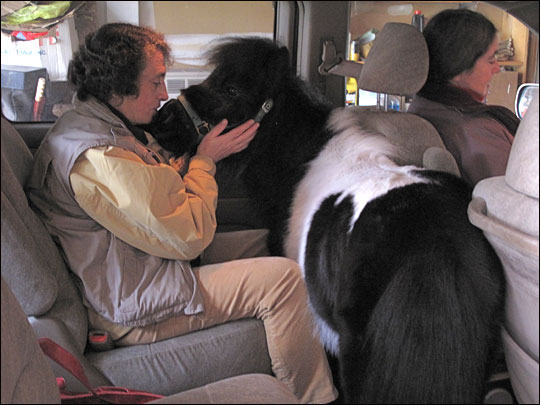 Ann Edie, who is blind, relies on Panda to guide her through her daily activities

Chances are you've seen a blind person accompanied by a guide dog. But what about a guide horse, a service parrot or a monkey trained to help an agoraphobic?

These are just a few of the nontraditional service animals that are used across the country to help people with disabilities and psychological disorders. As their uses are expanding, however, the government is considering a proposal that would limit the definition of "service animal" to "a dog or other common domestic animal."

In an article in the upcoming New York Times Magazine, Rebecca Skloot outlines why many people are upset about the pending law. Sometimes less familiar animals make better helpers, she tells Alex Cohen.

Miniature horses, for example, live much longer than dogs, which means that their owners don't have to readjust to a new guide as often.

"Horses tend to live and work into their 30s, whereas a guide dog will work six to eight years total," she explains.

And while guide horses may prompt more questions when entering a store or restaurant than guide dogs, their strengths can make it worth it, she explains. In addition to having amazing vision, they instinctually work in synchronicity with their owner.

"They are herd animals, so they naturally work really well with other people," she says, adding that "they are aware of their surroundings in a way dogs aren't because they are prey animals as opposed to predators."

Skloot spent many hours observing how a miniature horse named Panda helped a blind woman named Ann Edie. Even after all her preparatory research, Skloot was blown away.

"I could sort of envision how a horse could guide a person. But the level at which Panda guides her is amazing. In just a few blocks, I saw her maneuver around things that I, as a person that's sighted, wouldn't have thought of."

As Panda walks, her hooves make a distinctive sound on the ground, sort of like a person walking in clogs. The pitch changes on wood, leaves, cement and metal, offering important clues for Edie about her surroundings. Panda can also use her hooves to tell Edie to step up or touch the crosswalk button — something a dog couldn't do.

"This is a perk we didn't expect," Skloot says that Panda's trainer told her.

The surprises don't end with horses. Jim Eggers, who suffers from bipolar disorder, accidentally discovered that his parrot can help him calm down and avoid destructive behavior.

Sensing that her owner is on the verge of a psychotic episode, Sadie talks him down with, "It's OK, Jim. Calm down, Jim. You're all right, Jim. I'm here, Jim."

He carries her around at all times in a backpack carefully fitted to hold her cage. It's not an arrangement that people are accustomed to and people are often skeptical.

"The reaction from a lot of business owners and the general public is often one of suspicion, that you're making it up," Skloot says.

Eggers has been told, for example, that his parrot isn't allowed on the bus with him.

This is why the "service animal" definition is crucial to people such as Eggers and Edie. According to the American with Disabilities Act, service animals are allowed to go anywhere with their owners. Confusion stemming from the current law prompted a move for a more careful definition. But the proposed change would exclude birds and horses, among other animals not technically considered "common."

This means people like Eggers and Edie will risk breaking the law if they keep their helpers.

Your can read more about the proposed legislation in Skloot's article in The New York Times Magazine and see additional photos on her blog.