Accessibility links
Conflicted Emotions Follow Tennessee Coal Ash Spill Cleanup continues in the Tennessee coal ash spill that released more than a billion gallons of toxic sludge last week. The work is slow, and many residents highlight the complex relationship between the utility company that owns the plant and residents of the surrounding areas. 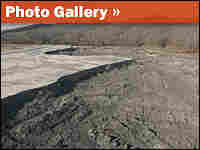 As cleanup continues near Kingston, Tenn., 11 days after a massive coal-ash spill, conflicting information about the safety of the air and water has caused a rift in the delicate relationship between the Tennessee Valley Authority and one of its communities.

The spill at the TVA's Kingston Fossil Plant released more than 1 billion gallons of gray, toxic sludge, inundating hundreds of acres after an earthen dam collapsed.

"We have 240 acres here, and we have had some land leased that we grow hay on," Gupton says.

For 10 years, Gupton has lived on the farm, raising cattle and horses and growing corn and hay. But a thick, cement-like sludge from the TVA spill has taken over part of his property, pushing a polluted creek into the spring he uses to water his cattle.

"It's backing up over our land, and if it has heavy metals and that kind of stuff in it, we won't be able to use the land, so that's a great concern," Gupton says.

There's a wooded spot next to the creek along the back of Gupton's property where he has taken his grandchildren fishing and camping. Now, the thick coal ash covers the ground.

Gupton stops walking where a stained mat of corn stubble slopes into a foot-thick sea of gooey, gray muck.

"This is about as far as I'm going," he says. I don't want to get into that. You see the dead fish — and no telling what-all is out there."

Gupton says he's disappointed that the TVA let this happen, and he's not sure he can believe everything the TVA tells him.

He's also sad that the spill has destroyed some of the farm where he and his wife, Sandy, hoped to spend their later years. He says he may never again feel safe taking his grandchildren camping and fishing on his farm.

"I don't think — you know, from what TVA says — they realize those kinds of emotions that the property owners have here," he says.

Those emotions directed at the TVA range from fury to sadness to sympathy, and in the case of Steve Patterson, gratitude.

Patterson's appliance store across the street from the Kingston plant has an electric sign that blinks bright red letters: "Thank you, TVA."

"The quality of my life and the people in this community are directly related to the efforts of TVA, from their flood controls to their power," Patterson says. "You know I enjoy my electricity being on every morning, noon and night, 24 hours a day."

These attitudes show how complicated the relationship is between the TVA and the communities throughout the Tennessee Valley.

The TVA has brought electricity and prosperity to previously impoverished areas of the Southeast, but it's also brought pollution and a legacy of strong-armed control over the region's land and water.

Historian and author Bruce Wheeler says the TVA and the people of the valley have a deeply dependent relationship.

"It's like TVA is part of the East Tennessee, Alabama, North Carolina, Virginia, Kentucky family — and families have complex relationships," Wheeler says. "They're part of our family for good and for ill."

Some families are better than others at working through conflict. Whether the TVA and the residents of East Tennessee ever resolve this conflict may depend upon how long it takes the TVA to clean up the mess — and whether the people living near the Kingston power plant will ever feel safe in the area again.