Accessibility links
Teaching Kids With Autism The Art Of Conversation Math and numbers are easy for 10-year-old Alex Lee. But chitchat can leave him stumped. Now, a new program for children with mild autism at Baltimore's Kennedy Krieger Institute is giving his social skills a boost.

Listen
Teaching Kids With Autism The Art Of Conversation 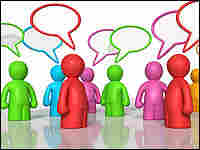 Math and numbers are easy for 10-year-old Alex Lee. He can tell you what pi is out to 100 digits.

But Alex doesn't do so well with chitchat. On a late fall day, he meets with psychologist Brian Freedman.

Alex asks Freedman if he knows how to play the piano.

Freedman starts to reply that the two weren't having a conversation about pianos, but Alex interrupts him: "What instrument do you play?"

"Hang on," Freedman repeats, "were we talking about me playing the piano?"

"What were we talking about?" Freedman asks again.

"What instrument do you play?" Alex continues.

"Were we talking about me playing instruments?" says Freedman.

For children like Alex with autism, social interactions are a struggle. But Freedman is part of a team of researchers at Baltimore's Kennedy Krieger Institute that has developed a course to help these kids improve their social skills. The program is called Building Up Development of Socialization, or BUDS.

Alex says he is doing better than he used to since starting the program several months ago.

"I had a perfect week last week," he tells Freedman. "I was never going into the red zone." That refers to a number of behaviors that get Alex in trouble.

Alex and several other children with mild autism have been meeting every week with Freedman and autism specialist Elizabeth Stripling. The idea is to teach the social skills that most kids pick up without even thinking about it.

Freedman says the gap between kids with autism and other kids isn't so wide when they're in kindergarten. But after that it can become a chasm.

The kids in Alex's group are between 10 and 12 years old. "They're starting to move toward middle school," says Freedman, "and the social rules are changing all around them, and so it's incredibly hard for them to keep up. So that's why we need to have a group like this."

During the sessions, Freedman and Stripling give pointers on how to do things as basic as keeping a conversation going.

For instance, they're told, if someone says he likes music, ask what kind of music. Freedman and Stripling remind the kids to make eye contact and listen when someone else is talking.

Freedman says it's all about coaching and practice, not just rules.

"One of the problems that kids with autism can run into is that when they're taught very rigid rules, they only stick to those rules," Freedman explains. "So we try to help them understand some nuances within interaction."

On this November afternoon, only two boys have shown up, Alex and another 10-year-old, named Joseph Santana.

A few minutes into the session, Joseph says he wants to talk about something that happened to him. Freedman and Stripling help Alex respond appropriately.

"On Sunday, I went to the emergency room," Joseph says.

"Because I couldn't breathe," Joseph continues.

Stripling jumps in: "Oh, my goodness!"

Then Alex takes their cue, "Were you dying or what? So sorry to hear that."

Freedman praises Alex for picking up the conversation and asks him what other questions might be appropriate to ask Joseph about his trip to the ER.

It's not completely spontaneous or natural. But Freedman says the conversation shows how far Alex has come. He is clearly listening, and his responses even suggest empathy.

And for Joseph, just telling the story is a big achievement. He has trouble communicating with other kids. But he has been trying hard with the children he's met in these sessions.

Freedman says the first thing Joseph did after getting out of the hospital was send an e-mail to the entire group.

"The e-mail wasn't just to check in and say hi, but it provided context to say that something had happened to him," Freedman says. "The next sentence was followed by, 'I'm OK.' And all of that was followed up by emoticons that showed the feelings that went along with that. So I would say especially for a kid like Joseph, that was tremendous progress."

Joseph grew up loving The History Channel, but hating school.

"Kids would pick on him, beat him up. You know, they were really not very kind to him at all," says his mother, Kathleen Santana.

When kids at school handed out invitations to birthday parties, Joseph never received any.

"In the beginning he just wasn't aware," Kathleen Santana says. "But now that he is getting older and learning more that that is happening, he is becoming more aware, and I think that is a hurtful situation for him."

Alex has been doing OK at school. But his father, Hugh Lee, says his son is lonely.

"He wants to make friends with other kids. I think it's just a disability in him that he doesn't know how to," says Lee.

After many weeks of practice, Alex and Joseph are getting ready for a kind of final exam — at the Baltimore aquarium.

The boys spend a December afternoon at the Australia exhibit, checking out animals and asking each other questions about what they're seeing and what the animals are doing.

Their parents, meanwhile, are awarding points when the boys do well and taking points away when they don't.

At the end of the visit, the scores are tallied. Alex is told that he gets a lot of points for initiating conversations. But he also has a few deducted.

This is the sort of conversation Alex likes. It's about numbers.

For kids like Alex, the stakes are high. They're more than smart enough to go to college, find jobs and live on their own.

But Freedman says his goal is to make sure they acquire the social skills to accomplish those things.