Accessibility links
Iconic Journalist Nat Hentoff Is Laid Off An 83-year-old icon of American journalism, Hentoff lost his job last Tuesday. Since 1958, he'd been a well-known fixture in New York City's Village Voice, writing about jazz and politics, among other topics.

An earlier audio version of this story erroneously referred to the closure of McClatchy's Washington Bureau. The bureau is not closing. 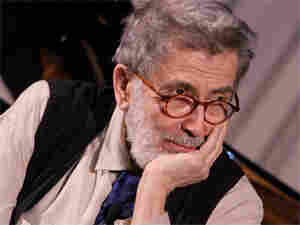 Nat Hentoff, who wrote about jazz and politics for 50 years in New York's Village Voice, was laid off on Dec. 30. Nancy Kaszerman/ZUMA/Corbis hide caption

Not immune to the tough economic times, The Village Voice — like many national media outlets forced to cut jobs — has seen several rounds of layoffs in recent years. Among those fired on Dec. 30: Nat Hentoff, an icon of American journalism and longtime prominent Voice columnist.

Fifty years after he began his association with the publication in 1958, Hentoff described his firing as being "like reading your own obituary while you're still alive."

In an interview, Hentoff says that the layoffs are troubling indications of the current state of media and newspapers.

"It's happening more and more: Those small papers in those small towns, some of them are folding," Hentoff says. "And that, of course, means... the Internet — which is fine, except what you get most of the time is people going to sites and blogs [with] which they already agree.

"I can't say it's exhilarating, but I've been through this before," Hentoff says. "I've been fired from some of the more prestigious publications over the years, so I can understand the tone of voice when I get the call."

Hentoff, 83, will continue to write a weekly column for the United Media syndicate and contribute pieces to The Wall Street Journal. His new book, At the Jazz Band Ball: 60 Years on the Jazz Scene, is expected later in the year.