Accessibility links
The Big Question Of The Year At the Edge Foundation, a group of forward-thinking people are pondering that very question. Some of their answers may surprise you.

The Big Question Of The Year

The Big Question Of The Year 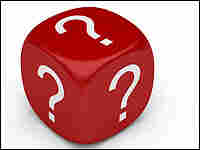 What will change everything? That's the Edge Foundation's question for 2009. Answers range from a technological breakdown to the rise of a new religion. iStockPhoto.com hide caption

Every year, John Brockman — who runs the nonprofit Edge Foundation in New York — asks a gaggle of forward-thinking people a provocative question.

This is the Edge Annual Question for 2009: "What will change everything?"

Writer David Bodanis suggests that some kind of massive technological failure would be game-changing. Daniel Goleman, author of Emotional Intelligence, says that reinventing industry to have less impact on the environment will alter the way we live. And Sherry Turkle, a psychologist at MIT, looks forward to the day when robots will serve as companions to humans. Here are a few other intriguing replies:

Stewart Brand, founder of the Whole Earth Catalog and co-founder of The Well online community: "Climate change is a global problem that cannot be fixed with global economics, which we have; it requires global governance, which we don't have. Whole new modes of international discourse, agreement, and enforcement must be devised.

"How are responsibilities to be shared for legions of climate refugees? Who decides which geoengineering projects can go forward? Who pays for them? Who adjudicates compensation for those harmed? How are free-riders dealt with? Humans have managed commons before — fisheries, irrigation systems, fire regimes — but never on this scale. Global governance will change everything."

April Gornik, New York artist: " There is a growing scientific consensus that animals have emotions and feel pain. This awareness is going to effect change: better treatment of animals in agribusiness, research and our general interaction with them. It will change the way we eat, live and preserve the planet. We will eliminate the archaic tendency to base their treatment on an equation of their intelligence with ours. The measure of and self-congratulation for our own intelligence should have its basis in our moral behavior as well as our smarts."

The Feeling That Things Will Inevitably Get Worse

Brian Eno, musician and recording producer: "What would change everything is not even a thought. It's more of a feeling.

"Human development thus far has been fueled and guided by the feeling that things could be, and are probably going to be, better. The world was rich compared to its human population; there were new lands to conquer, new thoughts to nurture, and new resources to fuel it all. The great migrations of human history grew from the feeling that there was a better place, and the institutions of civilization grew out of the feeling that checks on pure individual selfishness would produce a better world for everyone involved in the long term.

"What if this feeling changes? What if it comes to feel like there isn't a long term — or not one to look forward to? What if, instead of feeling that we are standing at the edge of a wild new continent full of promise and hazard, we start to feel that we're on an overcrowded lifeboat in hostile waters, fighting to stay onboard, prepared to kill for the last scraps of food and water?"

The Eruption of New Religions

Joel Garreau, a staff writer at The Washington Post and author of Radical Evolution: "Financially, politically, climatically and technologically, the ground is moving beneath our feet. Our narratives of how the world works are not matching the facts. Yet humans are pattern-seeking, story-telling animals. Human beings cannot endure emptiness and desolation. We will always fill such a vacuum with meaning."