Accessibility links
Gaza Strikes Spur Protests, Vows Of Retaliation Israeli airstrikes in the Gaza Strip, as well as Hamas rocket attacks against Israel, continue. Prospects of a cease-fire appear to have dimmed after the killing Thursday of a senior Hamas leader. Protests against the airstrikes spread to the West Bank. 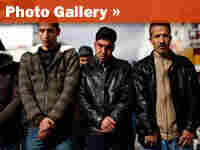 Israeli warplanes pounded Hamas targets in the Gaza Strip on Friday, while the Islamist group buried its dead, including a senior leader killed Thursday.

Israel says the airstrikes will continue until Hamas stops firing rockets into Israel. The Gaza death toll now stands at approximately 430. Hamas rocket attacks in southern Israel on Friday caused some property damage, but no fatalities.

The ongoing airstrikes and the death Thursday of Nizar Rayan, a senior figure in Hamas, appear only to have hardened the Islamist group against any cease-fire and sparked wider calls for reprisal attacks, including suicide bombings.

"After this heinous crime, all options are open for the resistance to curb the aggression, including martyrdom operations and striking Israeli interests in all places," said Ismail Radwan, a Hamas spokesman in Gaza.

Civilians in Gaza were shaken by more bombings.

Electricity remained spotty, and few ventured out into the rubble-strewn streets except to wait in long lines for bread. Israel struck more than 40 Hamas targets Friday, the army says. Hamas fired off more than 30 rockets. Doctors say nine people were killed in Gaza Friday, including five children. No Israelis were seriously injured, police say.

Some Allowed To Leave Gaza

"This morning, Israel facilitated the exit from Gaza of foreign nationals who want to leave," said Mark Regev, the Israeli prime minister's spokesman. "We are acting very energetically with the international community to facilitate the inflow into Gaza of foods and medicine."

At the same time, Israel continued to bar foreign journalists from entering Gaza, despite a ruling this week by the Israeli Supreme Court to allow some reporters to enter every time Israel opens up the crossing.

Meanwhile, protests broke out in several Palestinian cities in the occupied West Bank on Friday as Hamas urged supporters to observe a "day of rage" over the Israeli bombardment.

In Ramallah after Friday prayers, Omar Barghouti was among several thousand who marched through downtown streets. He said the bombings in Gaza had helped unite Palestinian factions around a common enemy.

"We're pushing for national unity. Without unity there will be no Hamas and no Fatah," Barghouti said. "Both factions have the objective of liberating Palestine. Anybody who idealizes one faction over another is mistaken. Factionalism will get us nowhere."

But while there were chants of "unity, unity," Palestinian police worked hard to keep the Fatah and Hamas supporters separated and repeatedly cracked down on pro-Hamas demonstrators. At one point, a Hamas man called a pro-Fatah protester "a traitor," sparking a fistfight; shots were fired into the air. A few people were injured in scuffles.

In an uncharacteristic way, Palestinian riot police and Israeli soldiers in the West Bank were united Friday in their quest to crack down hard on Palestinians seething over the Israeli bombing of Gaza. After getting roughed up by their own police force in Ramallah, hundreds of Palestinian teens and young adults made their way over to an Israeli checkpoint where they were greeted with rubber bullets and tear gas.

At the entrance to Qalandiya, a massive, walled checkpoint between Ramallah and Jerusalem, teenagers threw rocks, burned tires and taunted Israeli soldiers who responded with round after round of tear gas.

Israel declared a general closure of the West Bank through the weekend. The move, which severely restricts the movement of Palestinians, is aimed at reining in protests and violence. Israel also has added mobile checkpoints and bolstered security throughout Jerusalem and entrances to the city fearing more protests and reprisal attacks over its ongoing bombing of Gaza.