Accessibility links
Bon Iver On 'Blood Bank' (And An Unlikely Hit) Holed up in a northern Wisconsin cabin in the middle of winter, Justin Vernon wrote a few songs of loss and heartbreak. The resulting album was one of 2008's best. Vernon, who records as Bon Iver, discusses his forthcoming EP release.

Listen
Bon Iver On 'Blood Bank' (And An Unlikely Hit)

Songs from From Emma, Forever Ago: 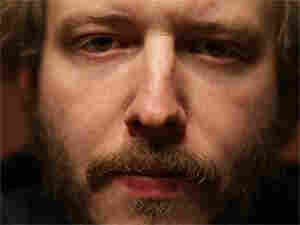 Frozen cabins in the woods of northern Wisconsin aren't normally places where legendary music is born. But in the winter of two years ago, the spirits of folk-rock somehow came together to help Justin Vernon — better known as Bon Iver — record a masterpiece.

If you spend any time here at NPR Music, you probably know the story. At his father's desolate, snowbound cabin, a down-on-his-luck Vernon recorded the basic tracks for his album For Emma, Forever Ago. And the tiny homemade project ended up landing on many critics' "Best of 2008" lists.

Fans of his story and his style have been clamoring for new music, and Vernon is just about ready to oblige. Bon Iver's four-song EP Blood Bank comes out later this month. The title track was actually recorded during the For Emma sessions, but Vernon says it didn't quite fit in the record.

"It just didn't seem to fit the story and lineage, I guess," he says. "So I just sort of surrounded 'Blood Bank' with three other songs that were very different from one other, and they all kind of came together as a palette cleanser for the last record. And I'm really excited about it."

Guest host Guy Raz asked Vernon about his newfound success and previewed some of the new EP. One track, called "Woods," was performed a capella, and featured some Auto-Tune studio effects.

"This for me was a way to extend my voice or to experiment with different techniques, or just sounds," Vernon says. "It was really freeing for me to do, and I'm really happy it's the last song on the EP."