Accessibility links
Israeli Spokesman: 'We Had To Respond' Mark Regev tells NPR that Israel's ground operation in the Hamas-controlled Gaza Strip could "end tomorrow — if we can be assured that the civilian population in the southern part of our country will no longer be on the receiving end of these terrible Hamas rockets."

Listen
Israeli Spokesman: 'We Had To Respond'

An Israeli government spokesman says the country's ground operation in the Hamas-controlled Gaza Strip could "end tomorrow — if we can be assured that the civilian population in the southern part of our country will no longer be on the receiving end of these terrible Hamas rockets."

"We want to protect the civilian population in the southern part of Israel that's been on the receiving end of rocket after rocket launched by Hamas in Gaza," he says.

Regev says the Israelis have learned from mistakes in their previous attempts to halt rocket attacks from Gaza.

"I think we've thought this operation through clearly," he says. "We didn't want this operation, but when Hamas threw out the cease-fire, when Hamas launched a barrage of rockets against Israel that reached a crescendo on Christmas Day — when we had in one 24-hour period some 80 rockets and mortar shells and missiles fired into Israel — we had to respond and we are."

In the first week of fighting, more than 400 Palestinians were killed, while four Israelis were killed by rocket fire. The violence in Gaza has sparked protests around the world.

Regev says the conflict has highlighted a growing gap between Hamas and the larger Arab world.

"Despite the natural tendency that's always there in times of conflict for the Arab world to close ranks, this time we've seen leaders from countries like Egypt, Jordan, Saudi Arabia, as well as the Palestinian leaders themselves, criticize Hamas," Regev says. "No one understands why Hamas threw out the cease-fire. The people of Gaza, they want to live in peace — they don't want this violence, just as we didn't want this violence."

The situation has been compared to Israel's invasion of Lebanon in 2006, which a government report has called a fiasco. But Regev says the comparison's not such a bad thing.

"To be fair, since the end of our war in Lebanon in 2006 — and I know there were mishaps; I know there were problems — but since that war was concluded, our northern frontier has been absolutely quiet. Hezbollah hasn't fired a single rocket into Israel," he says. "So if this operation in the south finished in a similar way, that wouldn't be the end of the world." 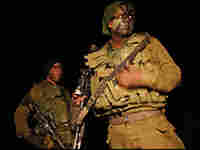 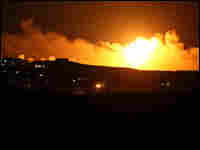 Israel has begun a ground operation inside the Hamas-controlled Gaza Strip involving a substantial number of troops backed by tanks and helicopters.

Israeli troops began moving into Gaza shortly after 8 p.m. local time on Saturday. The operation penetrated the territory at several points and was designed to seize areas of north Gaza being used to launch rockets against Israel, Israeli military officials said.

The aim of the operation, Defense Minister Ehud Barak said in a live television broadcast, is to end Palestinian rocket attacks on Israel and return southern Israel to a state of calm. It won't be short or easy, Barak said.

Ismail Radwan of Hamas vowed fierce resistance and to exact a high price, saying to the Israelis, "Gaza will not be a picnic. ... Gaza will be a graveyard for you."

Earlier, Israeli troops unleashed an intense artillery barrage to destroy explosives and mines in the areas they planned to seize. The ground operation came after an eight-day air campaign that failed to stop Palestinian rocket attacks.

Civilian witnesses hunkered down in Beit Hanoun, the northernmost Palestinian town in the Gaza Strip, said fierce clashes were underway between militants and Israeli forces. Both sides claimed to have inflicted casualties on the other.

Before the ground operation began, defense officials said around 10,000 soldiers massed along the border in recent days.

The first week of fighting in the Gaza Strip had claimed more than 400 Palestinians lives, while four Israelis were killed by rocket fire.

White House spokesman Gordon Johndroe said U.S. officials have been in regular contact with the Israelis as well as officials from countries in the region and Europe.

"We continue to make clear to them our concerns for civilians, as well as the humanitarian situation," Johndroe said.

The U.N. Security Council scheduled emergency consultations Saturday night on the escalation in Gaza. Secretary-General Ban Ki-moon has urged key world leaders to intensify efforts to achieve an immediate truce including international monitors to enforce a truce and possibly to protect Palestinian civilians.