Accessibility links
Israeli Ground Troops Enter Gaza Israeli troops overnight took control of a substantial portion of the northern Gaza Strip. Backed by tanks and warplanes, they appear to be attempting to surround the dense population center of Gaza City and to divide the territory in half.

Israeli troops overnight took control of a substantial portion of the northern Gaza Strip. Backed by tanks and warplanes, they appear to be attempting to surround the dense population center of Gaza City and to divide the territory in half.

NPR's Mike Shuster is in Jerusalem and speaks with host Liane Hansen about the Israeli ground attack in Gaza and what Israeli leaders are saying. 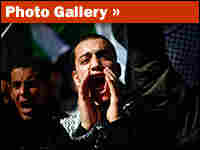 Rage And Rockets Across The Border
David Gilkey/NPR 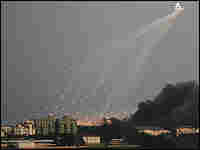 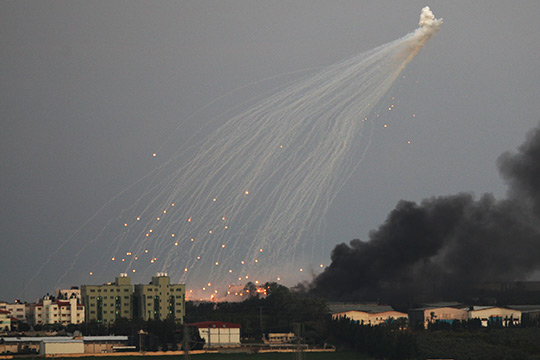 Israeli troops backed by tanks and warplanes took control of significant areas of the northern Gaza Strip on Sunday, but they encountered stiff resistance from Hamas guerrilla fighters.

Israeli troops pushed to the outskirts of densely populated Gaza City after entering Gaza on Saturday night. The land incursion followed eight days of aerial attacks on Gaza. According to witnesses inside Gaza, the Israeli military is seeking to surround the city, and further south, to split the territory in half.

Fighting has been reported throughout the day, with many reports of casualties. Dozens of Palestinians have been killed or wounded, many by tank fire, putting the Palestinian death toll over the past nine days at more than 500.

Medical sources in Gaza told the Associated Press that about 20 civilians had died in the most recent fighting.

Israel says 30 of its soldiers have been injured, two seriously. Hamas says it has captured two Israeli soldiers, but the Israeli military denied that claim.

Palestinian rockets continue to strike Israel, in most cases harmlessly. The areas in northern Gaza now seized by Israeli troops are the sites where most of the rockets have been launched, the Israeli military believes.

Calls For Israel To Desist

Anger at the Israeli government intensified in the region, but so did frustration at what many Arabs and others see as ineffectual diplomatic efforts to restore a cease-fire.

As Israeli forces retook some of the territory Israel withdrew from in 2005, Egypt called on Israel to "end its aggression immediately and without preconditions." Jordanian Cabinet minister Nasser Judeh urged the international community to "shoulder its legal and moral responsibilities" to end the violence.

In Iran, which has been accused of being a Hamas financier as well as supporter, parliament speaker Ali Larijani was quoted as saying "the Zionists should know that Gaza will become their graveyard."

The United Nations Security Council met Saturday but failed to approve a statement calling for an immediate halt to violence on both sides. Delegates said it was the United States that blocked the resolution.

Meanwhile, the European Union is sending emergency aid of more than $4 million to help Palestinian civilians in the Gaza Strip.

Already the largest donor of aid to the Palestinian territories, the EU says the additional offer of $4.2 million in aid is needed immediately to help with a situation it says is getting more desperate every day.

Louis Michel, the EU's aid commissioner, says the money will go primarily to food, emergency shelter and medical support, as requested in a U.N. flash appeal.

While Michel criticizes attacks from both sides that target civilians, he cites specifically the effects of Israeli airstrikes and travel restrictions on the Gaza population, warning the Israeli government that blocking aid is a breach of humanitarian law. Michel calls upon Israel to ensure the ability of aid workers to deliver the relief.

An EU delegation begins a peace mission to the region Sunday, with meetings in Cairo, then on to Jerusalem and Ramallah.

From NPR reports with Mike Shuster in Jerusalem, Peter Kenyon in Cairo and Teri Schultz in Brussels.