Accessibility links
Fighting In Gaza Overwhelms Medical System The heaviest fighting in the Gaza Strip since the 1967 Six Day War is taking an enormous toll on the territory's civilians. The medical system is particularly strained. Medical personnel are struggling under dangerous conditions and with limited supplies. 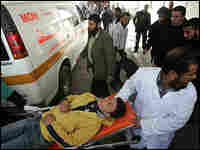 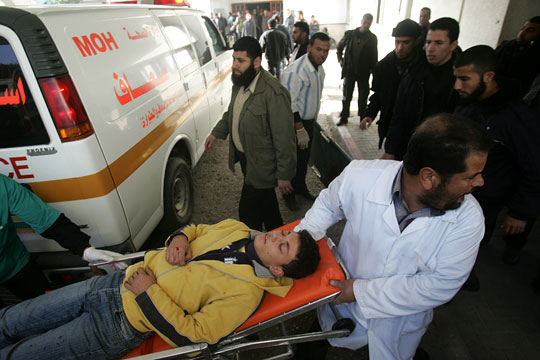 A wounded Palestinian boy is carried by stretcher upon arriving at Shifa Hospital.

The heaviest fighting in the Gaza Strip since the 1967 Six Day War is taking an enormous toll on the territory's civilians. The medical system is particularly strained.

Doctors, nurses, field medics and ambulances drivers are struggling under increasingly dangerous conditions to care for the wounded.

The United Nations says at least one-quarter of the more than 500 people killed in Gaza so far have been civilians. These include 14 people – mostly children – from families killed in Israeli bombardments Monday.

The United Nations says at least one-quarter of the more than 500 people killed in Gaza so far are civilians — including 14 people from two families, most of them children, killed in Israeli bombardments Monday.

The crowded, chaotic and bloodstained hallways of Shifa Hospital in Gaza City are now makeshift operating areas. On Monday morning, Jasim Bahtete tried to comfort his 10-year-old daughter, Asma, who was sprawled on the floor of the reception area. Her father says she was wounded Monday by shrapnel from an Israeli air or artillery strike – he is not sure which.

"She was doing nothing other than walking in the street. They hit a house in the neighborhood. I don't know if others were wounded. I just grabbed my daughter and ran to the hospital," he says.

Eric Fosse, a doctor with the Norwegian Aid Committee, says the hospital has been overwhelmed even more since the Israeli ground attack began Saturday night.

"There were a large number of casualties and dead people. This hospital was then turned into some kind of field hospital," Fosse says. "We operate [on] people in the corridors. We had people waiting for surgery, lying around in the corridors of the hospital, and they were dying before we could come to them. We saw some terrible scenes."

Doctors at Shifa say there is a severe shortage of intensive care beds. They are sending wounded people home early to free up space and trying to get people to go to local medical clinics.

But almost no one wants to move around the city. It's too perilous. Doctors believe some civilians are simply going untreated – and corpses are being left to decay in streets and homes.

Members of the Samuni family in the Zeitoun neighborhood of Gaza City say they fled an Israeli artillery or tank strike Monday, leaving seven dead family members behind.

The hospital's doctors and nurses are near the point of collapse, says Haitham Dababish, a doctor.

"The medical crews are really exhausted. They've been working around the clock with no rest or breaks. Medical teams across Gaza are worn out," he says.

The territory's fragile medical system was already facing key shortages of equipment, spare parts, specialists and some medicine due to the international sanctions against Hamas-ruled Gaza. The problem has only gotten worse during the war.

"They are keeping wards in the dark, keeping wards unheated to try and eke out the meager supplies of fuel they have so that they can maintain the operating theaters and the life-support machines," he says.

Israel has allowed several tons of medical aid to enter Gaza since the fighting began, and for now, the U.N. says, there is enough of most medicines. But getting the supplies safely distributed from the warehouses to the hospitals and clinics, aid groups say, has been nearly impossible. Ground fighting is raging across the territory. Gaza has been cut in two by Israeli infantry and tanks.

"We know they purposefully decide to locate themselves and rocket launchers within civilian areas. We take every possible care we can in being as accurate as we can to avoid risk to civilians in the vicinity," he says.

Gaza ambulance drivers and medical crews dispute that. Many have been unable to secure safe passage into combat areas. Miri Weingarten, with the aid group Physicians for Human Rights-Israel, says six medics and ambulance staff have been killed in recent days by Israeli fire while trying to retrieve wounded civilians.

"A tank hit an ambulance [Sunday] when it was trying to evacuate a family in the area of Tel al-Hawa. And three medics were killed in that situation. So we're seeing a real crisis with regard to medical conditions in Gaza," she says.

The physicians group is calling on Israel to allow more wounded to be transferred out of Gaza for treatment in Israel, Jordan or elsewhere. So far, the Red Cross says 109 patients have been transferred to Israel and Egypt – but that was before the ground attack. Since then, none of the more than 2,000 wounded civilians has left Gaza.