Accessibility links
Postal Service Sees Less Mail In Slumping Economy Mail volume suffers when the economy suffers, but this economic downturn is hitting the Postal Service particularly hard. The ailing housing and financial sectors, once heavy users of direct mail marketing, are cutting back. In the last fiscal year, mail carriers delivered 9.5 billion fewer letters and packages than the year before. 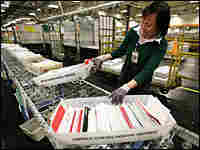 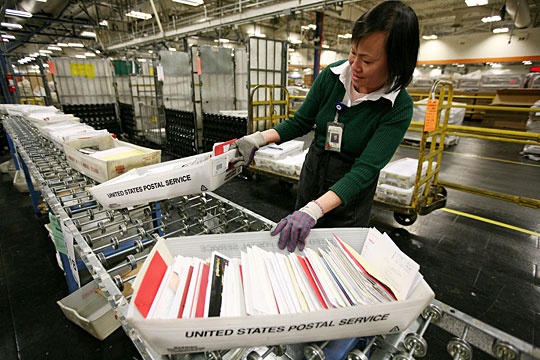 A U.S. Postal Service worker moves boxes of letters and cards in December 2008 at the post office sort center in San Francisco.

The recession is reaching well beyond the automotive industry or the mall. It's even hitting the U.S. Postal Service, the nation's third-largest employer. From holiday cards to credit card offers, mail volume is down. And the Postal Service is losing money.

Thousands of identical envelopes fly through a bar-code sorting machine at a Washington, D.C., postal facility. The items are mostly ads and solicitations asking for charitable donations or offering new credit cards. It's mail like this that alerted the Postal Service back in December 2007 that the economy was in trouble.

Stephen Kearney, senior vice president of customer relations for the Postal Service, says the drop in mail volume "accelerated throughout the year. ... Our mail volume had its greatest decline since the Great Depression."

In the fiscal year that ended in September, mail carriers delivered 9.5 billion fewer letters and packages than the year before. Kearney says the Postal Service made aggressive cuts and still lost $2.8 billion. Fiscal year 2009, which started Oct. 1, isn't looking any better, he says.

"We may have losses that are larger than the $2.8 billion we had last year," he says. "Revenue is not doing well so far in October and November."

Mail volume always suffers when the economy suffers, but this economic downturn is hitting the Postal Service particularly hard. That's because the slumping housing and financial sectors have typically been big users of direct-mail marketing. In the third quarter, credit card offers were down 30 percent from the year before. That's according to data from the tracking firm Mintel Comperemedia.

"Lenders and credit card issuers need to be more selective about who they're mailing offers to, so that's down," says Stephen Clifford, a Mintel vice president.

"You send less mail, you spend less money," he says.

And it's not just corporations. Postal Service officials say people sent fewer holiday cards and packages last year. More people are paying their bills online. There's even a "Do-Not-Mail" movement urging people to protect the environment by skipping catalogs and paper statements. Dan Blair, chairman of the Postal Regulatory Commission, says this recession is forcing the Postal Service to evolve.

"The question remains, will consumers come back to using the mail?" he asks. "And more importantly, will the banks, will the credit card companies, will the financial institutions continue to use the mail, or are they going to look to using the Internet as a means of communicating with their customers?"

And if they don't come back, Blair says the Postal Service and Congress may have to more seriously consider some cost-cutting ideas that have been out there for a while.

For now, Kearney says the Postal Service is adjusting routes to reflect the reduced mail volume, offering early retirement to employees and changing operations at sorting facilities from 24 to 18 hours per day. There haven't been any layoffs, but through the trims, the Postal Service has cut the equivalent of more than 20,000 jobs.

"A lot of people have predicted the demise of the Postal Service many times before, including after the invention of the telegraph, the telephone and the fax machine," says Kearney. "And we think when the economy recovers, demand for our shipping and mailing services will be renewed."

And when the economy does recover, Kearney says the Postal Service should be among the first to know — since mail volume is what you might call a lesser-known leading economic indicator.