Accessibility links
Homeland Security Gets The Reality TV Treatment A new reality show takes viewers behind the scenes as border guards, Secret Service agents and patrol officers protect the nation. Homeland Security, USA has the look of a documentary, but its producers stay clear of politics and deliver a show that's more COPS than Frontline. 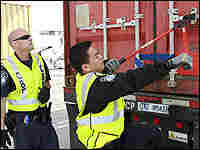 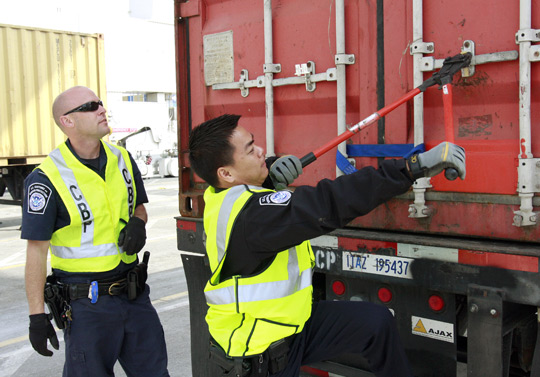 In a scene from Homeland Security USA, officials check a truck's cargo in Long Beach. 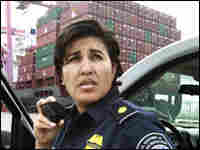 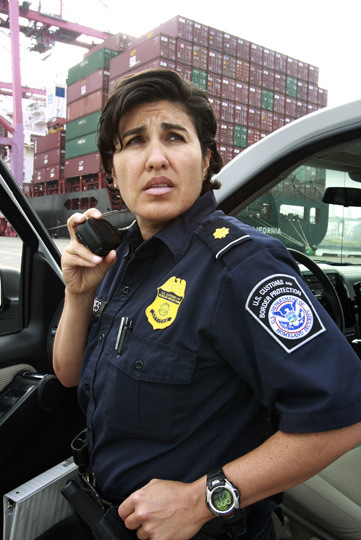 The Department of Homeland Security may bring to mind bright interrogation lights rather than the lights of Hollywood. But Tuesday night, ABC debuts a new reality show that takes viewers behind the scenes as border guards, Secret Service agents and patrol officers protect the nation.

The show, called Homeland Security USA, has the look of a documentary, but its producers stay clear of politics and deliver a fast-paced show that's more COPS than Frontline.

From the opening credits, set to a driving electronic score, ABC's newest reality show whips you across the country, showing off the multitude of jobs done by DHS agents.

"The United States, with entry points at hundreds of airports, harbors and along a border of more than 100,000 miles, is protected by the Department of Homeland Security," the intro boasts.

At first, the show has the feel of a glizty public service announcement or a fast-paced recruitment video. But within minutes, the feverish pitch slows slightly to show off the unprecedented access given to ABC's producers.

There aren't any terrorist plots uncovered, though viewers do get to watch agents thwart drug smugglers. And then there's the lighter side of the job. In one scene, for instance, an immigration officer deports a busty belly dancer from Switzerland.

There's little comic relief at the busiest border crossing in the nation, between San Diego and Tijuana, Mexico. Agent Ed Brown's daily routine doesn't look quite so glamorous without the quick camera cuts and pulsing score.

Brown landed a starring role in the premiere episode — and much teasing from colleagues.

"I get called names like Hollywood, and they keep asking for autographs — but I won't sign an autograph for under five bucks," Brown chuckles.

Camera crews spent two weeks filming at the border crossing. Inevitably, not all the footage portrays the agents in a positive light.

In one scene, a man and woman traveling with their two kids are pulled from a car at gunpoint after being flagged as armed and dangerous. Agent James Carraway, one of the officers involved, says it turned out to be a case of mistaken identity.

"Sometimes those things happen," Carraway notes. He says it doesn't bother him that the footage made it onto the show because "the one thing I believe is not trying to portray a false sense of what we do."

DHS spokesman Ed Fox says that the agency has no editorial control over the show but that it has suggested changes when an agent's safety was compromised or to protect law enforcement strategies. He says the show doesn't deal with policy or politics, just the hard work of keeping the country safe.

"Sometimes that's lost in the rather heated debates of Washington over the high-profile, sensitive issues that we deal with at this level," Fox says.

But some immigrant advocates and other critics say you can't separate the workers from the work, and they charge that the show is propaganda. A few have planned to hold protests in front of ABC affiliates Tuesday night.

That may be the least of worries for Homeland Security USA. Starting next week, it will compete in the 8 p.m. slot against the champion of reality TV: American Idol.