Accessibility links
Bush Declares Marine Preserves In Pacific In the largest marine conservation effort ever, President Bush has set aside parts of three remote and uninhabited Pacific Island chains as national monuments. The preserves will be protected from commercial fishing and oil and gas extraction. 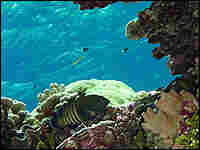 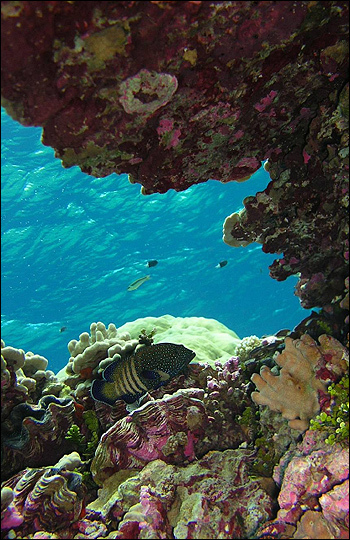 A Blue Spotted Grouper swims along the Kingman Reef. 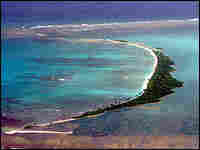 * The Rose Atoll, part of the Territory of the American Samoa, and 500 square miles of surrounding waters in the South Pacific.

* An area of more than 118,000 square miles around the Northern Mariana Islands and the Mariana Trench, which is 36,000 feet below the surface of the Pacific Ocean.

These preserves are designed to conserve areas that are unspoiled — and largely unvisited — by human beings, including the deepest canyon on earth, the Mariana Trench.

Bush has declared much of the Mariana Trench — some 36,000 feet below the surface of the Pacific — and waters around some nearby islands as a marine national monument. He's also declared as monuments the area around Rose Atoll, part of the Territory of American Samoa, and the seas surrounding seven islands that are U.S. territories scattered in the Pacific.

"These places are so pristine that they are like time machines that take us hundreds of years in the past," says Enric Sala, a marine ecologist at the National Geographic Society.

Sala is one of the very few people who has actually had a chance to swim around some of these remote islands, which are surrounded by coral reefs.

"You jump in the water and immediately you are surrounded by 10, 15 sharks that are very curious, and many other fishes that have probably never have seen humans before," says Sala. "It feels like the sensation that Darwin must have had when he stepped in the Galapagos for the first time."

Sala says working in these marine areas is an exceptionally rare opportunity to visit a reef that's at the peak of its health.

Seventy-five percent of the world's corals are found in the Indo-Pacific region, and corals there are disappearing twice as fast as tropical rain forests, according to the Environmental Defense Fund.

Ideally, Sala says they can be used as a model to rebuild reefs elsewhere around the world.

If fully implemented, Bush's marine monuments will protect these areas from fishing and poaching, shark finning, potential shipwrecks or groundings that damage reefs, oil spills from commercial fishing and the introduction of invasive species.

The marine monuments, which aim to protect the largely untouched reefs, also have a unique volcanic landscape and ecology.

"It's the sole place on Earth that has huge, active mud volcanoes, one more than 30 miles across," Josh Reichert of the Pew Environment Group says of the Mariana Trench. One bird species, the Micronesian megapode, is the only known living bird that uses volcanic heat to incubate its eggs, he says.

And, says Reichert, the trench contains the second boiling pool of liquid sulfur ever discovered. The first is on one of Jupiter's moons.

Protecting these marine areas will more than double the size of marine-protected areas Bush previously established. These three marine monuments follow the 2006 historic establishment of the Papahanaumokuakea Marine National Monument in the Northwestern Hawaiian Islands. Together, the four marine monuments will protect 350,000 square miles.

"It's a monumental achievement. If you add up all of the areas that have been protected over the course of the past 2 1/2 years, it's far greater than any person has ever done," says Reichert, who says he is celebrating the actions of a president who is not exactly known for his environmentalism.

The ocean is so vast, these reserves save just the tiniest bit, but Reichert says it's an important bit. There is a lot of life and wonder in the ocean and it's under more stress now than ever before.