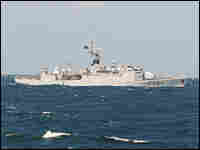 The French warship Premier Maitre L'Her is part of an international fleet patrolling the Gulf of Aden off the Somali coast for pirates. Corey Flintoff/NPR hide caption

Sailors from the Premier Maitre L'Her capture suspected Somali pirates in the Gulf of Aden on Jan. 1. French Ministry of Defense hide caption

An international fleet of warships is making some progress against Somali pirates who've been preying on merchant ships in one of the world's busiest trade routes. Last year, pirates attacked more than 100 ships in the Gulf of Aden, the waterway that funnels most of the shipping between Europe and Asia. They captured more than 40, and are still holding at least 15, demanding ransom money for them and more than 240 crew members.

Since the first of the year though, warships from the United States, the European Union and other nations have thwarted at least seven pirate attacks and arrested more than two dozen suspects. On New Years Day, a French warship, the Premier Maitre L'Her, captured eight alleged pirates in their skiffs as they tried to board a Panamanian-flagged cargo ship.

The captain of the French frigate, Lt. Cmdr. Alexis Beatrix, said his crew fired "an intimidating shot" to warn the suspects that the warship meant business. Then the frigate launched a fast skiff and a Zodiac inflatable raft with a boarding party of specially trained sailors to apprehend the eight men.

Beatrix says the men were traveling in two skiffs, like those used by local fishermen, but they were carrying automatic rifles, rocket-propelled grenades, grappling hooks and rope ladders for boarding vessels. He says the men spoke no English, and only one spoke enough Arabic to answer questions. They carried no identification, but said they were Somali nationals.

The captain says the men were provided with food and medical care aboard his ship. Under the provisions of an agreement between France and Somalia's transitional federal government, the French will hand the suspects over to Somali authorities.

The Premier Maitre L'Her is part of a European Union flotilla that includes vessels from Germany, Denmark, Spain and other nations. Its missions in the Gulf of Aden have included escorting a cargo vessel chartered by the World Food Program to deliver humanitarian aid to Somalia, and protecting convoys of merchant tankers and container ships.