Accessibility links
Washington, D.C.'s Musical Experiments Washington, D.C., is known more for suits than fun, but it also has a long history as a home to diverse styles of music — from Duke Ellington to hardcore to go-go — and some of the hottest guitarists to ever touch the fretboard: Roy Clark, Roy Buchanan, Danny Gatton. Today, the city is home to an experimental music scene that's thriving under D.C.'s official radar. 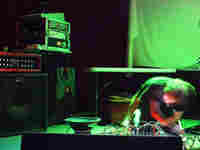 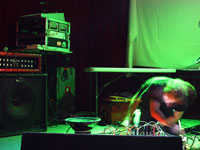 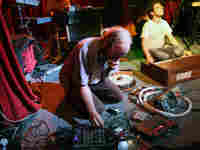 This Bag Is Not a Toy and Cutest Puppy in the World at Sonic Circuits. IntangibleArts via flickr hide caption 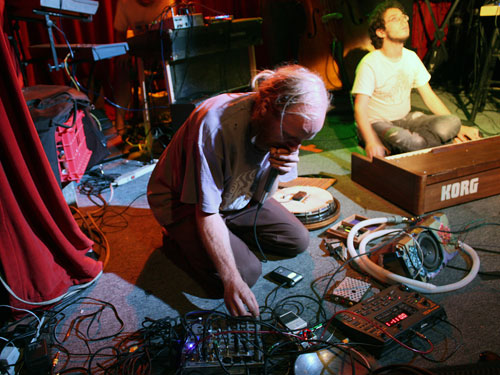 This Bag Is Not a Toy and Cutest Puppy in the World at Sonic Circuits.

Purchase District Of Noise From Zeromoon 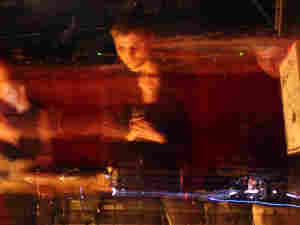 Washington, D.C., is a gray town, known more for suits than fun. There are lots of lawyers, lobbyists and politicians. But there are also lots of musicians. Washington has a long history as a home to diverse styles of music — from Duke Ellington to hardcore to go-go — and it has been a hotbed of country and bluegrass. Washington and its environs have also been home to some of the hottest guitar players ever to touch the fretboard: Roy Clark, Roy Buchanan, Danny Gatton.

Today, D.C. is home to a different sort of scene: Experimental music is thriving under the city's official radar. One of its homes is the Velvet Lounge, a neon-lit bar with blood-colored walls on the fringe of the city's uber-trendy U Street corridor.

On a recent evening, a motionless crowd packs the lounge's dark upper bar. The whine is intense. It's a relentless, unforgiving, slightly pulsating, shrill cry of a sound. It's being produced as part of an event called the Sonic Circuits Festival of Experimental Music, which showcases electronic, experimental and avant-garde music. As a slim, serious young woman with a bow at her throat manipulates circuit boards and digital delay pedals, the whine changes, lowering and distorting. Bonnie Jones was born in South Korea and raised by New Jersey dairy farmers. Now, she lives near D.C.

One of the most devoted chroniclers of this scene is music writer Marc Masters. A recent article in the journal Signal to Noise reflects his deep immersion in and affection for the city's experimental music scene. In the article, Masters concluded that D.C.'s lack of a major music school and professional opportunities has helped foster a scene dominated by friendly amateurs.

"Since even nominal financial success is impossible," Masters wrote, "few participate for any reason other than the music. That has helped eliminate stylistic cliques, allowing jazz, noise, electronica, modern composition, free folk and psych rock to all rub elbows."

Surak is a regular fixture at Electric Possible, a gathering of die-hard experimental-music junkies who meet monthly in a basement classroom of George Washington University's music department. Surak creates his own spooky, interplanetary-influenced soundscapes as a solo project called Violet. He uses an autoharp that, in his words, has seen better years.

"It's pretty much warped, and I removed all the keys, and it's never been tuned," he says with evident pride.

Electric Possible is run by a musician named Jeff Bagato. By day, he works at GWU's law school. By night, he's Tone Ghosting — a respected local act with a signature sound achieved by scraping a handsaw over thrift-store vinyl records. Bagato is widely credited with helping keep D.C.'s experimental scene vibrant at a moment when several other stalwarts have drifted. A booker who was responsible for getting experimental groups gigs at bars has left town. And Jonathan Matis, who helped nurture the scene, has largely turned his attention to other projects, though he remains supportive.

None of this bothers musicians such as Dave Rickert, a defense contractor who plays Tangerine Dream-inspired music in a duo called RDK. He says you may not like the music, or even consider it music at all. But you have to admit that this scene values imagination, ingenuity and originality — all things Washington, D.C., could use a lot more of.