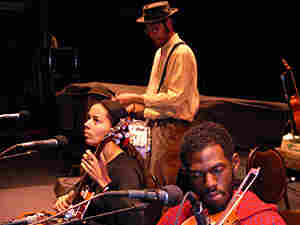 The band learned its repertoire under the tutelage of North Carolina fiddler Joe Thompson, who mentored the group in the traditions and tunes of Piedmont string-band music. The lone exception is the group's beat-box-driven cover of "Hit 'Em Up Style," an R&B and pop hit for singer Blu Cantrell.